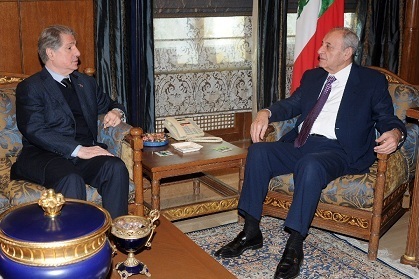 Head of the Kataeb Party Amin Gemayel expressed on Tuesday hope that the servicemen kidnapped from the northeastern border town of Arsal in August would be released.

He said after holding talks with Speaker Nabih Berri: “We must carry out negotiations to release the Arsal captives as soon as the conditions are available.”

The party leader was meeting the speaker to thank him for his hospitality in light of his tour of the South on Saturday.

“We seek to exert all efforts and sacrifices to ensure the return of the Arsal captives back to their loved ones,” added Gemayel.

“We should cooperate with all who can help resolve the case,” he continued.

A number of policemen and soldiers were kidnapped by Islamist gunmen in August in the wake of clashes in Arsal.

Four captives have been executed so far, and the jihadists have threatened to kill the remaining hostages unless there is a deal to free Islamist prisoners in Lebanon.

The state has repeatedly refused to hold direct negotiations with the kidnappers.

The Muslim Scholars Committee had recently announced that it will seek a pledge from the captors on halting executions after the relatives of the servicemen called on it to lead the negotiations.

sure because Berri and the evil party own the South of Lebanon!

Amin and Berri meeting up: the most random meeting of Lebanese politicians...