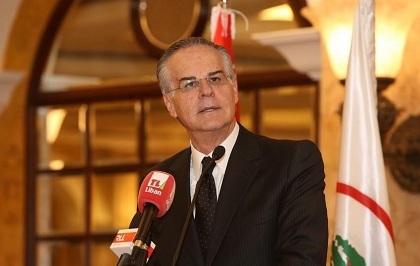 The Lebanese Forces suspended on Tuesday its participation in the electoral subcommittee until a parliamentary session is scheduled to vote on a new draft-law.

LF MP George Adwan told reporters after a meeting for the committee at the parliament that “the subcommittee is only passing time until a settlement is reached regarding the presidential post.”

He lashed out at the rival parties at the committee, pointing out that whenever a breakthrough is reached new proposals are presented.

Adwan called on the rival parties to head to the parliament to vote on a new electoral law whether a breakthrough is reached or not.

The LF MP said that “only the hybrid electoral law can better represent all parties.”

“We refuse to fool people and if there are any intentions to adopt a new electoral law we are the most enthusiastic,” Adwan added.

The subcommittee is discussing several proposals, the so-called Orthodox Gathering proposal, a draft-law that divides Lebanon into 50 districts based on a winner-takes-all system, in addition to the hybrid suggestion made by Speaker Nabih Berri.

The 11-member parliamentary subcommittee tasked with discussing several electoral law proposal kicked off meetings recently, in light of the extension of the parliament’s tenure, in an attempt to reach consensus over a hybrid electoral draft-law.

The March 8 and 14 alliances are represented in the committee, which was granted a one-month ultimatum by Berri to reach consensus.

Lawmakers also deepened the political deadlock in the country after they voted once again in November to delay elections and announced they would extend their mandate until 2017, which was met by a huge popular dismay.

Most blocs have announced their rejection to the 1960 electoral law that is based on a winner-takes-all system. It was used in the 2009 elections.

May you RIP dear flamethrower

hahaha! How you link events, how you analyze, and how you reach conclusions is one of your strongest traits. People envy you, emulate you, and want to be like you. My boss and during our Monday morning meetings always says to us " Learn from flamesrower, learn from this man so you may develop and succeed". Somesing Anazar flamesrower!

Flamethrower, the LF said loud and clear that they will be present at the parliamentary session when scheduled, to vote on electoral laws.
I cannot say the same of the behaviour of other people going to parliament.
They also said that they back the hybrid electoral law suggested by Berri.
If Geagea was in KSA when this happened does not mean much, the party can function during his absence.

Saudi orders for them, but Iranian orders for you....
if they are traitors, you also are a traitor!

A follower of the caporal - who is an agent to Iran - makes you a traitor too.

I am not going to embark in that Flamethrower, this is an endless debate that applies all around to the whole political class in Lebanon.

As for the level, if we wait for others to raise it this forum will be in the pits very soon...

Saudi orders for them, but Iranian orders for you....
if they are traitors, you also are a traitor!

sure no phone calls exist between Lebanon and iran... no contact with hezbollah exists... poor FT your arguments are just stupid as usual....

Aoun made the Christians loose a lot in Taef, and now he is heading to eliminate the Christian presence altogether by not attending the presidential elections.

Aoun was not in Taef, Geagea was.. wow absolutely no knowledge of history

although your comment is not worth a penny, there you have it:
what aoun did created Taef, and geagea had to accept to salvage what could be salvaged.
anyway, what is aoun ding about the presidency? why does he not accept the democratic vote? an empty presidency is what Christians need at this stage?
aoun: destroyer of the Christian presence in Lebanon.

funny FT... recently kanaan said that we must stick to taef... they still reject it? hypocrisy as usual from FT the stinking worm...

more revisionism from FT the syrian worm :
" the Syrians and collaborators won, and taef was their cherry on top."
true it also included many present M8 leaders, your allies....
BIG differnec is that you M8ers are still Under the orders of bashar while M14 stopped.... so you are still collaborators doing the exact same thing you hypocritically denounce...