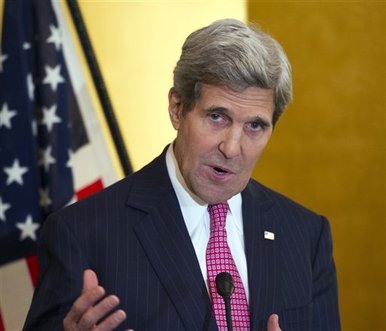 The Palestinians told U.S. Secretary of State John Kerry on Tuesday they will submit a draft resolution to the U.N. Security Council even though he warned of a veto, a Palestinian official said.

The official said Kerry was told they would submit the text as planned on Wednesday calling for a withdrawal of Israeli troops from occupied Palestinian territory within two years.

Kerry told the Palestinian delegation that Washington would use its veto within the Security Council, he said of talks held in London between the secretary of state and chief Palestinian negotiator Saeb Erakat.

The official said the talks had been "long and difficult but achieved results".

If the United States uses it veto, Erakat told Kerry, the Palestinians would apply to join all international organizations and conventions, including the International Criminal Court, a move firmly opposed by Washington.

The Jewish lobby in the US is so strong...
The US is risking what remains of their credibility in the region.

OH YEAHl like this is NEW NEWS. You guys or so ignorant