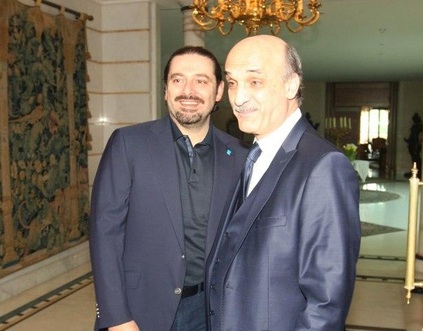 A statement issued by Hariri's office said the two men met in Riyadh and discussed the current situations in Lebanon and the region.

“The two parties stressed the importance of pacifying the political atmosphere and preserving security and stability,” said the statement.

They also underlined the need to “continue consultations and discussions aimed at overcoming the current political crisis and electing a president as soon as possible.”

Discussions tackled the general political situations in Lebanon and the region, according to Geagea's press office.

Geagea also met on Tuesday with Saudi National Guard Minister Prince Miteb bin Abdullah. They held “extensive talks on the issue of fighting terrorism and the need to confront this phenomenon in the Arab world by all parties,” the press office said.

The LF leader had arrived in the Gulf kingdom on Sunday.

“No one can claim to be Christian and working for the sake of Christians as they simultaneously paralyze the presidential post. No one can claim to be a resistance as they obstruct the presidential elections,” Geagea said Sunday in a meeting with Lebanese expats, in an apparent reference to Free Patriotic Movement leader MP Michel Aoun and Hizbullah.

“To reach a solution, we must all go to parliament and elect a president and congratulate him or we – Christian parties and all the Lebanese – can find an agreement over a consensual president in order to prevent all forces from interfering in our presidential vote,” Geagea added.

God Bless them both; if we have any hope left in this country it is because of them two leaders.

But wait, according to Flamey it was Geagea who paralysed the presidency 25 years ago...

God bless you both, real lebanese working for breaking awsy from the vicious circle put in by Aoun and huznola in orders directly by syrian dictaorand khaminai and his rev guard aid commander.

may all your remaining life RIP flamethrower

All militia leaders were murderous traitors during the Lebanese civil war and then there was Taef and then there was an amnesty.
Geagea went to jail for his crimes and was then released. Nasrallah and co. are still out there, roaming murderous militia style, even after being accused of murdering Rafic Hariri and may other civilians and politicians.
This militia that is funded by the Islamic Republic even decided to involve Lebanon in a war in next door Syria.

Oh right, Geagea.. Jesus himself has spoken!!! If you dont follow Geasus, you are obvioulsy not a Christian! Lmao.. what a joker.

Flamey, how am I spreading lies? It was you who infamously told M11er that Geagea paralysed the presidency. It was so funny I took a screenshot of it. By the way, your whole Ta'ef argument is pointless. The president was always weak even before his powers were "taken away" from him. The last strong presidents were Helou, Chehab, and Chamoun (the last of which I'm sure you hate because he used the Marines to save his government). But starting with Franjieh, he was a Syrian puppet, then Elias Sarkis the good guy who had no army or government to do anything, then Amin the wimp who was not a fraction of Bashir and didn't try to do anything Bashir envisioned, then your idol/acting president destroyed Achrafieh and was responsible of the emigration of thousands of Christians. Okay so spare me the Ta'ef argument. We haven't had a strong president in 45 years.

Your idol Aoun could have went after Amal or PSP and demand them to disarm. But he went after Ouwwet first because they're Christian, and he wanted all the Christians under his authority. He tried doing it just like Bashir, only thing is that Aoun was commander of the LAF which is supposed to be a secular institution. So that goes to show that Aoun was nothing more than a warlord, running a militia in disguise as a state's armed forces.

because it is common sense