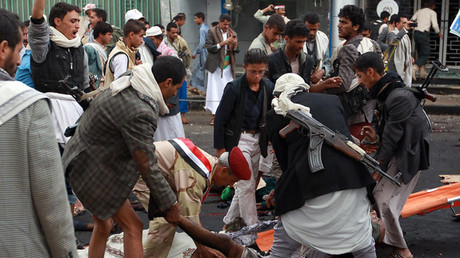 Fifteen children on a school bus were among at least 25 people killed in a suicide car bomb attack in central Yemen targeting a Shiite militia leader on Tuesday, security sources said.

The children were killed when their school bus was caught up in the attack targeting the home of a leader of the Shiite militia, known as Huthis, in the town of Rada, a security source told Agence France-Presse, blaming the attack on al-Qaida militants.

A medical source confirmed that at least 25 people had died in the attack.

The defense ministry, on its website 26sep.net, condemned "this cowardly terrorist attack on the home of a citizen and a school bus," and also held al-Qaida responsible.

Yemen has been rocked by instability since the Shiite fighters seized control of the capital Sanaa in September.

The Huthis have since been expanding their presence throughout the country but are facing fierce resistance from Sunni tribes and al-Qaida's powerful Yemeni branch.

Tuesday's bomb attack was the second to target Huthis in Rada in little more than a month.

On November 12, a suicide bomber killed dozens of people gathered at the residence of a tribal chief in Rada.

The mixed Sunni-Shiite town has seen heavy fighting since the Huthis took over parts of it in October, while al-Qaida has set its sights on taking over Rada.

State authority has weakened in the face of the rivalries on the ground.

Armed Huthis on Tuesday surrounded the defense ministry in Sanaa after having been denied access, a military source said.

Another group of Shiite militiamen broke into the offices of Ath-Thawra newspaper demanding the dismissal of the chairman of the board, Faisal Makram, a source at the official daily told Agence France-Presse.

The militiaman said they were following orders from their leader, Abdelmalek al-Huthi, "to end corruption in all state institutions."

Another memorable quote from ...flamethrower--
"..-flamethrower-.
remember, the one who keeps saying 'sectarian' (because it cannot win any argument otherwise) is in all likelihood the hypocrite sectarian itself."

But, as usual, flamethrower brings nothing to the table, aside from clinging to posts and offering no content whatsoever: الوعاء ينضح بما فيه

hehehe! @eagle, you always incriminate him with his own words;)

Another example why Christians should seek the protection of Iran.

Salafists are good at killing children, Sunni and Shia alike.