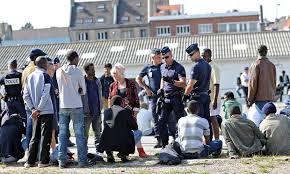 Swedish police have arrested two Egyptian men and a Lebanese woman for illegally transporting asylum seekers into the country aboard a private jet, the police said Tuesday.

The Cessna jet, registered to an Egyptian company, landed in Malmoe airport Monday evening from Beirut with ten people on board who were not registered on the passenger list.

"The airport authorities notified us about this," police spokeswoman Ewa-Gun Westford told Agence France-Presse, confirming that three arrests had been made for people smuggling.

"The refugees have been handed over to the Migration Board," she said, adding that their asylum applications would be processed.

At least two of the refugees had Syrian nationality, according to Swedish news agency TT.

In 2013, Sweden became the only European country to automatically grant Syrian refugees permanent residency and has since received record numbers of asylum seekers from the war-torn country.

Most of the estimated 80,000 refugees arriving in the country this year -- mainly from Syria, Eritrea and Somalia -- reportedly entered the country via Denmark, which is joined by a bridge to southern Sweden, after long trips overland.

Good work! We should send tens of thousands..

a shia no doubt