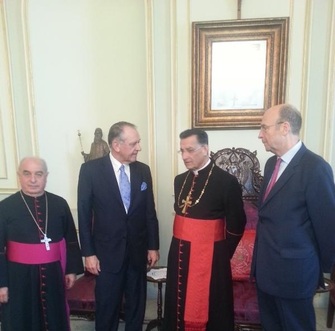 The United Nations on Tuesday urged “unity” among the Lebanese political parties in order to find a “consensus” presidential candidate and put an end to the protracting political crisis.

The remarks were voiced by visiting Deputy Secretary-General Jan Eliasson after talks with Maronite Patriarch Beshara al-Rahi in Bkirki.

“One problem that His Beatitude the Patriarch Rahi and I discussed was of course the fact that there has been a vacancy in the presidency for so long. I agreed with him that this vacancy is causing problems,” Eliasson said.

“I am sure that with the Lebanese innovative minds and, hopefully, the sense of responsibility of all leaders that they would come together to find a consensus candidate,” he added.

The U.N. official stressed that “this is of course a Lebanese matter.”

“There are those who say that the situation is influenced by the outside. That is possible but I also think that it could be solved if you have unity among the different actors in Lebanon and that is in the interest of the nation,” Eliasson added.

The presidential seat – the country's top Christian post -- has been vacant since president Michel Suleiman's term ended on May 25. Political differences and electoral competition have led to a lack of quorum in 16 electoral sessions in parliament.