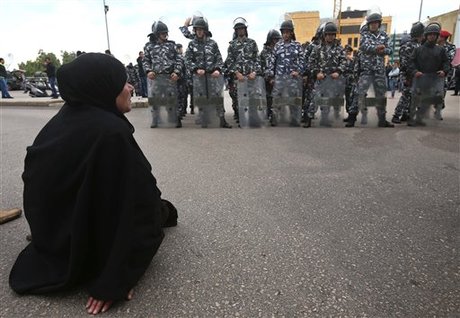 Muslim Scholars Committee member Sheikh Wissam al-Masri revealed on Wednesday the al-Qaida-affiliate al-Nusra Front pledged to release a soldier or more servicemen in its captivity if the state officially tasks him with the negotiations, a day after the group denied that he has been asked to mediate with the cabinet.

Masri pointed out in comments published in As Safir newspaper that the Islamist gunmen are losing hope regarding negotiations with the Lebanese state over a prisoners swap deal.

He claimed to have received a call on Tuesday night informing him that the Nusra Front will gradually deny tasking him with the negotiations.

“The state has until Wednesday afternoon to task me officially with the negotiations or I will not tackle the matter anymore,” al-Masri told the daily, saying: “Consequently, everyone will be held responsible for their acts.”

He revealed that “al-Nusra Front pledged to release a soldier or more after I am officially tasked with the negotiations as a goodwill gesture on the condition that the process of negotiations occurs in a faster pace.”

“The state should also be ready to implement the preliminary conditions regarding the release of women and children and the protection of civilians in (the eastern border town of Arsal) and the surrounding areas,” al-Masri said.

However, a source close with the case told Turkey's Anatolia news agency that a “new negotiator will be appointed to assume the indirect negotiations with the abductors,” considering the case is still at the first stages.

“Negotiations will not happen unless the Lebanese state appointed one side to tackle the matter with the kidnappers,” the source added.

On Tuesday, a prominent al-Nusra Front leader denied the appointment of al-Masri to negotiate with the Lebanese state the release of the soldiers and policemen, who were taken hostage after the Front and the Islamic State group overran Arsal in August.

Four captives have been executed so far, and the jihadists have threatened to kill the remaining hostages unless there is a deal to free Islamist prisoners in Lebanon.

Al-Akhbar newspaper published on Wednesday quoted sources close to the Islamic State of Iraq and the Levant as saying that the “group lowered the level of its demands.”

“ISIL is now demanding the release of three prisoners in return for each captive in its custody.”

The IS previously expressed readiness to release the Lebanese soldiers and policemen in its captivity if the Lebanese state sets free five Islamist inmates in return for each captive.

The cabinet totally rejected any swap deal with the jihadists.

The Nusra said that the four-month hostage crisis would end if 10 inmates held at Lebanese prisons would be freed for each hostage or seven Lebanese inmates and 30 female prisoners held in Syria would be released for each abducted soldier and policeman or if five Lebanese and 50 women inmates would be freed.

OTV: Bernard George Salameh, 18, was kidnapped by assailants near his residence in Baalbek. The kidnappers asked for ransom.