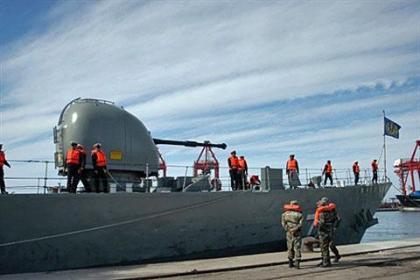 A Turkish exploration ship is searching for gas and oil "close to" a Cypriot drilling zone off the divided Mediterranean island of Cyprus, a senior energy ministry official said Tuesday.

"Our ship is exploring gas close to the Greek Cypriot zone, and under the escort of Turkish naval vessels," the official told Agence France Presse, speaking on condition of anonymity.

The Turkish ship Piri Reis, which embarked on its controversial mission last week, started its research on Monday under military protection in the eastern Mediterranean.

The official declined to say how long the ship would be staying in that zone.

Regional tensions have been rising after the Cyprus government, recognized internationally, but not by Turkey, made a deal with U.S. energy firm Noble, which has already started exploratory drilling for gas off the southern coast of the divided island.

In retaliation, Turkey dispatched its own exploration ship to the region after signing an accord with the Turkish Republic of Northern Cyprus, a statelet only recognized by Ankara, for gas search in the designated areas off the island.

I am not sure what the deal will be but i can assure you that we don't another conflict with a neighboring country ..We are trying to avoid a difficult dispute with Israel....Oh BTW the Knight templar's comments reflect a really medieval thinking ...I might be wrong how old are you Torpedo Boy?
MrBrain

The Turks learned well from their long association with the Zionists. Take what does not belong to you. The first ones that should voice surrport for the Greek Cypriots are the Palestinains and the Arabs in general.