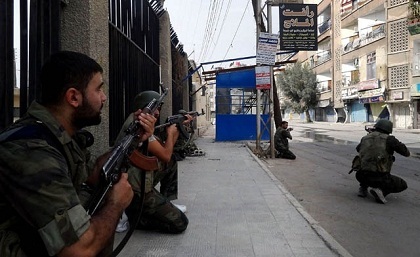 Shiite Muslim militiamen from Afghanistan have been fighting in Syria for months alongside President Bashar Assad's troops, a monitoring group said Wednesday.

Afghanistan is home to a Sunni Muslim majority but nearly one-fifth of the population is Shiite, mainly Farsi-speakers and from the Hazara ethnic group.

"They later started fighting alongside loyalist troops all over Syria, especially in the northern province of Aleppo," he told Agence France-Presse.

Shiites around the world revere the shrine, with many volunteering to defend it from any attacks in the war between Assad loyalists and mainly Sunni rebels.

The Observatory did not specify how many Afghans were fighting in Syria.

In the northern city of Aleppo, meanwhile, 16 regime loyalists, including Afghans, were killed in a clash Tuesday night in the Malah area, said the Britain-based group.

The army has been making advances in the area, and aims to cut off a supply route used by rebels who hold more than half of Aleppo, once the country's commercial capital.

Foreign fighters have streamed into Syria to support both sides in the conflict that broke out in March 2011 when Assad's forces unleashed a bloody crackdown on democracy protests.

The regime has been backed by thousands of members of the powerful Lebanese Hizbullah group, as well as Iranian, Iraqi and Palestinian militiamen.

Syria's regime has been dominated for 40 years by the Alawite community, an offshoot of Shiite Islam.

Sunnis make up the vast majority of Syria's population, as well as the rebels fighting to oust Assad.

Elsewhere in Syria, the number of civilians killed in a regime air strike against the Waer district of Homs on Tuesday has risen to 32, the Observatory said, adding that 11 were from one family.

Among the victims was a member of a delegation that had been in talks for a ceasefire with the government, as well as his wife and nine other members of their family.

Waer is the last rebel-held area of Homs, which was once known as the "capital of the revolution" against Assad.

They know how it is to live in a country full of Taliban types, so they won't let the disease spread.

Just like their brothers in Hezbollah sent to fight in Bosnia and anywhere the ayatollah dictates these Afghans are part of the Iranian Légion étrangère that is the Ayatollah's mercenaries, the citizenship they were born with is non-consequential.