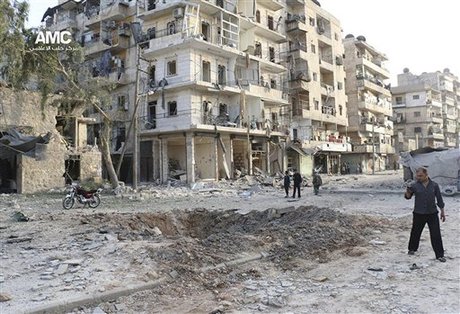 The Syrian regime is in talks with a U.N. peace envoy over a possible "freeze" in fighting in the northern city of Aleppo, U.N. and pro-regime sources said Wednesday.

Deputy U.N. envoy Ramzy Ezzeldin Ramzy presented Monday a copy of a plan for Aleppo to Deputy Foreign Minister Faisal Muqdad, "and the Syrian side asked for time to study it," daily newspaper Al-Watan said.

Ramzy has been in Syria since Saturday.

On October 30, U.N. peace envoy Staffan de Mistura proposed to the Security Council implementation of "freeze" zones, or local ceasefires in the country, which has suffered nearly four years of civil war.

He later said Aleppo could serve as "a good candidate" for such a step.

De Mistura's spokeswoman Juliette Touma told AFP: "We continue to negotiate, including through giving parties to the conflict maps and supporting material that help explain how are we going to make the freeze in Aleppo operational."

There are several thorny issues involved. The regime wants to limit the freeze to Aleppo city, while the rebels want to extend it all the way up to the Turkish border.

A government source said the U.N. wants to open crossing points between the rebel and regime-held sides of Aleppo that would be guarded by U.N. peacekeepers.

But the regime believes such a force would be an infringement of Syria's sovereignty.

The government insists that state-run public services such as the police be allowed to return to rebel-held areas, whereas the U.N. favors the idea of self-rule in the opposition areas.

As the talks take place, government troops are advancing in Aleppo province, threatening to cut off the rebels' supply line.