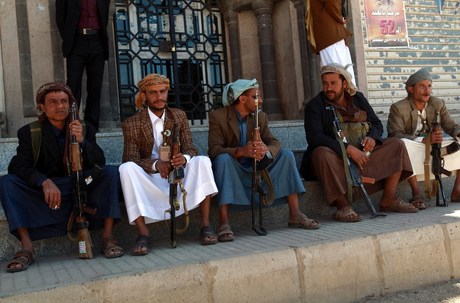 Shiite Huthi militiamen have stormed government installations in the Yemeni capital, tightening their grip on power in the city they overran in September, witnesses said Wednesday.

Gunmen from the Ansarullah movement occupied the headquarters of the state-owned Safer oil and gas company and barred employees from entering the premises, company sources said.

In another show of force, militiamen stormed the headquarters of state television and radio, according to sources at both media.

They have said the move is part of their fight against alleged corruption.

The Huthis, who fought authorities for a decade in their northern stronghold, overran Sanaa on September 21 and have since expanded to coastal areas and southern regions, where they faced Sunni tribes backed by al-Qaida militants.

Huthi gunmen have also blocked the entrance to Hudaida port on the Red Sea, and prevented its chief Mohammed Ishaq from reaching his office, witnesses said.

On Tuesday, a group of Shiite militiamen broke into the offices of Ath-Thawra newspaper demanding the dismissal of its board chairman, Faisal Makram, a source at the official daily told AFP.

They said they were following orders from their leader, Abdelmalek al-Huthi, "to end corruption in all state institutions."

Armed Huthis also surrounded the defense ministry in Sanaa after having been denied access, a military source said.

In another sign of its weakness, the government of Khaled Bahah lost a parliamentary vote of confidence on Tuesday.

Saleh remains influential in Yemen nearly three years after he was forced to step aside following a bloody year-long crackdown on Arab Spring-inspired protests against his iron-fisted rule.

He has been accused of backing the Huthis.