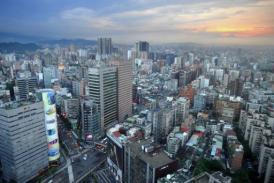 Prosecutors said deadly gas explosions in Taiwan were caused by "multiple human errors" Thursday as they charged 12 people over the blasts, including the head of a chemical company and government officials.

The disaster killed 32 people and wounded more than 300 in southern Kaohsiung city as explosions in underground pipelines sparked massive fires on July 31 and left trenches running down the middle of some streets, with vehicles thrown onto the roofs of buildings.

In the first indictments since the blasts, prosecutors charged the chairman of LCY Chemical Corp., which operated the pipeline, and 11 others with causing death and injuries by professional negligence and offences against public safety.

"Multiple human errors led to the grave tragedies of 32 people losing their lives and 321 people being injured," prosecutors said in a statement.

The accused "completely ignored whether the facilities transporting highly hazardous materials were still intact and posed no safety risk after 20 years and disregarded the lives and properties of numerous people living in areas the pipes were passing which ... led to the catastrophes," according to the district prosecutor's office.

Kaohsiung-based LCY Chemical failed to regularly maintain the underground pipes transporting propene which caused them to rust and damage, leading to the power blasts, it said.

The company also conducted the wrong procedure to test the leaks and continued to transport the gas to its factory, it added.

Three employees of a company contracted by LCY Chemical to deliver propene and three former officials who failed to properly monitor and inspect construction of the pipelines when they were completed in the 1990s were also charged.

The others indicted were all LCY Chemical employees.

Under Taiwan's law, the most serious of the charges is "causing death by professional negligence", punishable by a maximum five-year jail term.

Her government was heavily criticised for failing to prevent the disaster after gas leaks were first reported.

Some residents expressed anger Thursday that the city government had been cleared.

"I think it should have ordered a shutdown of the leaking pipes and the evacuation of residents in time as many people, including myself, called to report gas leaks," said local borough chief Lee Chun-kuai, who lost her husband in the blasts.

Like many in the city she is still deeply affected.

"My husband is gone and nothing will bring him back.

"I am still very sad but I have to carry on serving people in my borough as many of them suffered losses and are depressed."

City officials have said that around 10 tonnes of propene leaked from the underground pipelines operated by LCY Chemical in the hours before the first explosion.

Kaohsiung lies adjacent to a huge petrochemical complex housing dozens of plants, and many pipelines run under the densely-packed city.

Kaohsiung's deputy mayor and three other officials in the city government resigned to take political responsibility after the disaster.