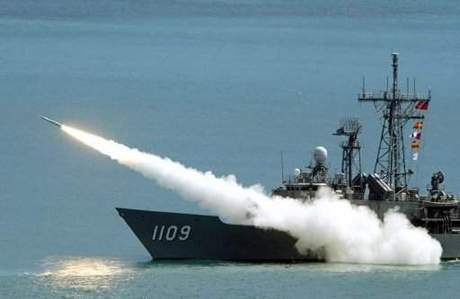 China on Friday said it had lodged a formal complaint with the United States over its approval of frigate sales to Taiwan and called for an end to arms sales to the island Beijing claims as a renegade territory.

Washington, which recognizes Beijing as the sole government of China, is also legally obliged to provide defensive arms to Taiwan, which has its own government and which Beijing views as a rouge province to be retaken by force if necessary.

Chinese foreign ministry spokesman Qin Gang slammed the deal on Friday, saying that "China is strongly dissatisfied" with the bill.

"We are firmly opposed to arms sales to Taiwan by the U.S.," he added, reiterating Beijing's longstanding position.

"We have launched solemn representations with the U.S. side," he said, using formal language for a diplomatic protest, adding that Taiwan "remains the most sensitive issue in China-U.S. Relations."

He also called on the U.S. to cut official and military exchanges with Taiwan.

Taiwan's government welcomed the deal, with its defense ministry expressing "sincere gratitude to the U.S. government and Congress," in a statement.

It added that it had completed procedures for buying the frigates, and "will allocate the relevant budget next year."

Relations between the U.S. and China have long been strained over Taiwan, which has been ruled separately from the rest of China since a Nationalist army fled the mainland in 1949.

Taiwan's tense relations with China have warmed since the island's President Ma Ying-jeou was elected in 2008 on a platform of improving cross-strait ties and reviving the slowing economy.

But with rising public anxiety over China's influence on the island, sentiment has turned against the Beijing-friendly approach. Voters say trade deals have been agreed in secret and not benefited ordinary Taiwanese people.

A Chinese army general this month warned that China will not leave the Taiwan problem "unresolved for a long time", after the island's ruling party suffered a bruising election defeat.