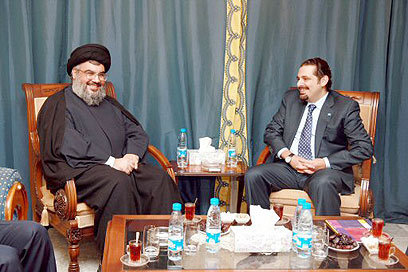 The much-anticipated dialogue between Hizbullah and al-Mustaqbal movement is scheduled to start on Tuesday, media reports said, although Speaker Nabih Berri did not confirm the date.

Local dailies published on Monday said the representatives of the two parties will meet in Ain el-Tineh under Berri, who will later withdraw from the talks to pave way for the rivals to discuss controversial issues.

Nader Hariri, who is the adviser of al-Mustaqbal movement chief Saad Hariri, Interior Minister Nouhad al-Mashnouq and MP Samir al-Jisr are expected to represent al-Mustaqbal in the talks.

Despite the reports that the dialogue's first session will take place on Tuesday, Berri reiterated that the talks will be held before the New Year.

He told his visitors on Sunday that he will only preside the first session. Berri did not rule out the presence of his aide Finance Minister Ali Hassan Khalil in all the sessions.

“The most important aspect of it (the dialogue) is direct contact between the two sides without the interference of a mediator,” he said.

“The dialogue will be serious and we will work on its productivity,” Berri told his visitors.

He stressed that the talks will help ease tension between Sunnis and Shiites in the country.

Berri said the dialogue's agenda will be open except for certain issues that the two sides have agreed to keep aside, such as the Syrian crisis and the arsenal of the resistance.

“It's natural to discuss about the presidential crisis from the aspect of (finding) a consensual president and not dealing with names,” he said.

Lebanon has been without a head of state since President Michel Suleiman's six-year term ended in May over differences between the March 8 and 14 alliances.

Al-Mustaqbal is at odds with Hizbullah over its involvement in Syria's civil war. The party has sent its members to fight alongside troops loyal to President Bashar Assad against rebels seeking to topple him.

The movement has also repeatedly called on Hizbullah to hand over its weapons to the Lebanese state similar to what the country's militias did at the end of the civil war.

No its not a betrayal.

Muhammad peace be apon him forgave the Meccans after years of oppression and wars against him.

Imam Ali RA forgave Muawiya for the sake of the nation and So did Hassan.

Did that change their status? No.

Sometimes you must overcome your ego and revenge for the sake of your people and nation.

Your people are your family not just your inner circle

Diplomacy and dialogue is greater than wars and revenge.

I would say give it a chance.

Then if they HA renege then make it public.

I know Taqqiya is always in play.

Agree, there is no beter than dialog and diplomacy. Agree 100%., enough is enough.

Agree, there is no beter than dialog and diplomacy. Agree 100%., enough is enough.

Hezbollah does not and will not honor any commitments. Its history speaks for itself. Hariri once again is showing his statesmanship to the detriment of his popular base.

Imagine sitting with your killer and respecting what he says.

you discuss with someone who stands by his word.
for these Iranian terrorists, their word means nothing.

And who said they would never turn their weapons on other Lebanese? Sayyed Hassan

And who turned his weapons on other Lebanese in 2008? Sayyed Hassan

Who gave condolences to Hariri's family in secret, agreed to the creation of the STL, and now does not recognise it? Sayyed Hassan

You're the stupidest Aouneh on the planet. Seriously, what is wrong with you? Even normally Aouniyeh know Hezbollah's crimes...

Keep up the garbage terrorist. Don't deny the killers of Shatah and Hariri has a link to each other. Azzam brigades

Hahahahahahahaha right Abdullah Azzam Brigades killed Shatah according to al-Manar and al-Akhbar, two of the biggest pieces of rubbish (along with As Safir). By the way, did anyone react to that garbage report?? Did you hear anyone talk about it??

No nickjames, because the ignorant M14 will accuse the Resistance forever, even if all evidence is on the table.

That is what they are here for.

(1) Ex PM Saad Hariri won two consecutive elections, he won them fair and square. Sayed Hassan even appeared on TV and made this public statement that the M14 coalition won it, fairly and squarely. Yet twice, Saad Hariri found himself at the receiving end of Hezbollah and its M8 allies. They illegally occupied many parts of Beirut, closed business and bringing to ruin those who made a livelihood there. They closed the roads to BIA, they engaged into many proscribed actions till they forced Hariri to accept an illegal arrangement and accept a power sharing agreement. What did we get, but more assassinations and the depleting of M14's MPs?

(2). Where is it legal to win then be forced into a marriage of inconvenience? This time again, it seems obvious that Saad has learned nothing, his good heart will once again pit him with people a lot more experienced than him but the difference is that they are ruthless, and he is naive. If Saad continues, then Geagea should move out of this M14 alliance, together with Kataeb and the rest of the block that forms M14. Saad is a good man, but he does not listen and wants to play politics. His late Dad was also a good man, but definitely a lot more savvy and experienced, the late Rafic would never be duped by anyone, not even Sayed Hassan, Berri Baba, Bashar Assad or anyone, the old man despite his genuine kindness was just too wise for them, no wonder they killed him.

It gets really difficult to debate your points when you try to turn simple accusations into facts, "no wonder they killed him" and you know that is fact phoenix. what evidence can you bring forward that the STL has failed so far to do. If you truelly believe that Saad Hariri is so naive then how do you accept him as a leader of the m14 or even as a prime minister. Furthermore, how do you know his father was never duped by anyone, how do you know he was never duped by the Saudis or the Israelis into making him believe that he would be the saviour of Lebanon following the civil war only to have him killed in order to create a fitna between the shia and sunnis.

City, and how do you know that the Israelis were implicated in the murder of Hariri? I rest my case ya man.

I never said that i know that, i was simply asking you that how do you know thats not a possibility. I mean you are so sure that HA or Assad killed Hariri based on pure speculation, but you dont want to point out other possibilities. So i wouldnt rest your case too quick.

Cityboy spare us the who-killed-Hariri argument. It's so pathetic, honestly. I have Aouniyeh friends and they even know Assad ordered it with Hezbo complicity. They acknowledge that politics is an ugly game, and that Hariri had to be killed. You guys all try to discredit the STL's case, then when we ask you who did it you say you have no clue?? Really??

Try doing this: consider all the possible culprits in the assassination and compare them. Start with Israel (like Hezbollah claims) then look at Fatah al-Islam (like Aoun claims) and then look at the STL (which is what almost the entire world believes).