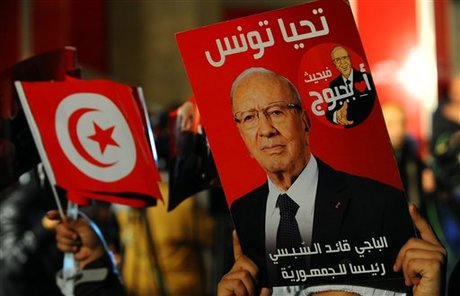 Veteran anti-Islamist politician Beji Caid Essebsi was declared the winner of Tunisia's first free presidential election on Monday, capping off the transition to democracy in the birthplace of the Arab Spring.

But in a sign of the challenges ahead, police fired tear gas to disperse hundreds of youths protesting against the result.

On Monday, however, Marzouki's spokesman said on Facebook the outgoing president had congratulated his rival.

Essebsi thanked Marzouki and told him: "Tunisia's future lies in consensus and it needs all its children, without exclusion or discrimination," a party statement said.

Speaking on national television later, Essebsi pledged to be "president of all Tunisians".

"The campaign is over and we must all look to the future."

A first round of voting on November 23 had seen Essebsi in the lead with 39 percent of the vote, six points ahead of Marzouki.

Participation in the second round was 60.1 percent, electoral commission chief Chafik Sarsar said.

U.S. President Barack Obama congratulated Essebsi and hailed the vote as "a vital step toward the completion of Tunisia's momentous transition to democracy", a White House statement said.

Foreign policy chief Federica Mogherini of the European Union, which sent an observer mission for the election, praised Tunisians for sending "a message of hope to all the people who, like them, aspire to a future that's more peaceful, democratic and prosperous."

President Francois Hollande of France, Tunisia's former colonial ruler, also praised the people for their "determination, sense of responsibility and spirit of compromise."

The vote was seen as a landmark in Tunisia, which sparked the Arab Spring mass revolutions with the 2011 ouster of longtime strongman Zine El Abidine Ben Ali.

However, the campaign was bitter and divisive, with Marzouki insisting an Essebsi win would mark the return of Tunisia's old guard.

Essebsi accused his rival of representing the moderately Islamist party Ennahda that ruled after the revolution and which installed him as president.

Continued divisions were clear as some 300-400 protesters clashed with police at El Hamma in the south, where Marzouki had widespread support.

The interior ministry said protesters torched two police stations and that the clashes, which erupted late Sunday, continued on Monday.

Essebsi's Nidaa Tounes party said protesters in Tataouine, also in the south, had tried to burn one of its offices.

The vote was the first time Tunisians have freely elected their president since independence in 1956.

President Abdelaziz Bouteflika in neighboring Algeria also congratulated Essebsi and the "maturity" of the electorate.

The weekly Tunis Hebdo said the vote would "enhance Tunisia's reputation as the only Arab Spring country that has managed to survive."

The revolution that began in Tunisia spread to many parts of the Arab world, with mass protests in Egypt, Libya, Syria and Yemen.

In every country except Tunisia the revolution was followed by violent turmoil or, as in Syria's case, a devastating civil war.

Sunday's vote was largely peaceful, though troops guarding ballot papers in the central region of Kairouan who came under attack shot dead one assailant and captured three, the defense ministry said.

Ahead of the vote, jihadists issued a videotaped threat against Tunisia's political establishment.

Nidaa Tounes party won parliamentary polls in October and Essebsi promised to begin the process of forming a government after the presidential vote.

Ennahda came second in the general election and has not ruled out joining in a governing coalition.

Under a new post-revolution constitution, presidential powers have been curbed to guard against a return to dictatorship.

The next government will face major challenges.

Tunisia's economy is struggling to recover from the upheaval of the revolution and there are fears that widespread joblessness will cause social unrest.

A nascent jihadist threat has also emerged, with militant groups long suppressed under Ben Ali carrying out several attacks including the killings of two anti-Islamist politicians.

Tunisia and most countries are moving forward, while Lebanon is moving backwards.