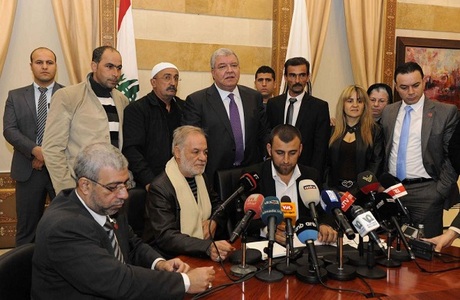 Justice Minister Ashraf Rifi announced Monday that he “personally” trusts Arsal deputy municipal chief Ahmed Fleiti, who has embarked on a mediation mission in the case of the captive servicemen, while noting that the man has not yet received an official authorization from the government.

“We're concerned with the freedom of the servicemen, whose release must be secured as soon as possible,” said Rifi after meeting at the ministry with a delegation representing the families of the hostages.

“The freedom of the servicemen has priority over everything else and all politicians support a swap deal,” he added.

The minister noted that the families' recent meetings with state officials “have resolved major obstacles in the case,” as he stressed that “the government has not spared any effort.”

“There are negotiations with Daesh (Islamic State) and al-Nusra (Front), and we hope they will be efficient,” Rifi revealed.

In response to a reporter's question, the minister pointed out that “Fleiti has not been officially tasked” with mediating in the case.

“But I can personally say that he is a trusted man who enjoys credibility. There is another channel of communication with al-Nusra but I will not disclose it,” Rifi added.

The families had earlier in the day met with Interior Minister Nouhad al-Mashnouq.

Sheikh Omar Haidar, a spokesman for the families, thanked the minister after the talks for his “transparency and honesty.”

Haidar quoted Mashnouq as saying that “the doors of negotiations are open for any person seeking to play a positive role in the case.”

The minister also noted that the government is still seeking an “unconditional” swap deal.

“We support every effort that is being exerted in this case to secure the release of our brothers, the servicemen, … topped by the endeavor of Mr. Ahmed Fleiti,” Haidar said, in the name of the families.

Around 25 policemen and soldiers are being held by the IS and the Qaida-linked al-Nusra Front. Four hostages have been executed by the two groups.

The servicemen were kidnapped in early August during clashes between the jihadists and the Lebanese army in and around the northeastern border town of Arsal. The militants have demanded that Islamist prisoners held in Lebanese jails be released in exchange for the hostages.

After Qatar ended its mediation on December 7, the distressed families called for a role for the Muslim Scholars Committee in the negotiations, but the government has so far refrained from giving the committee an official authorization.

However, the name of another mediator, Sheikh Wissam al-Masri, surfaced later in the month in media reports before he eventually visited the IS captors and the hostages in Arsal's outskirts.

Masri announced that the nine IS-held captives are in good health except for two who are suffering from inflammations.

As for Fleiti, he announced Sunday that he had been tasked to mediate in the case by Health Minister Wael Abou Faour.

Answering a question about Masri, the spokesman Haidar said: “We have not received any statement from the Islamic State group or anyone else. Ahmed Fleiti has been designated and they support him and back him.”

“I believe that Mr. Ahmed Fleiti is communicating with both al-Nusra Front and the Islamic State, but he started with the file of the IS and he will eventually move to the file of al-Nusra Front,” Haidar added.

he also personally trusts hujairi (arsal's mayor) and ahmad al assir (a crazy man he once armed when he was heading the ISF).

"There is another channel of communication with al-Nusra but I will not disclose it,” Rifi added.
yea we know, he speaks to his boys everyday.

you've written some amazing analysis in the past. But this one I must admit is one of your best. As usual it is backed by facts, evidence, taped conversations, bank records, and of course your unbiased word. You have redefined trolling and made it trendy.

eagleyawn, when will you learn that it is not enough to steal other people's lines? when you have nothing to say, just say nothing.

mowaten, is this your 200th post of the day?

and besides that, do you have anything remotely relevant to say marounalshishani ?

I trust Mr. Mowaten, Mr. Flamethrower, Mr. Mystic and their domestic helper Miss Southern to act on my behalf to release our soldiers.

Seems like Huzbola have better and faster communication than anyone "asking" to bring their kid back ..and here he come within few days..Who is in contact you say?

thanks for reminding us that when you mean to get things done they get done.

rifi has all the communication channels and coziness you can have with nusra and da3esh, but what is lacking is a will to free the soldiers.

True, they understand and speak the same language that mashnouk does not understand or speak, does that make him a bad person, in the other hand, being so close to the isis and nusra mentality so you can negotiate, speak and understand them ... for sure makes you (GhizEbola) closer to them... for sure.

funny, because the ones holding the same language as nusra and d3esh are all between saudi, qatar and m14.

and btw, get to know your subject before going into your pointless rants. the hezbollah fighter who was released was not abducted by nusra or da3esh.

At least there are people trying to free these soldiers that hizbushaitan and aoun want dead.

like you, the only thing he is good at is pointless talk and hate mongering

lol and how's it working in your imaginary world? did rifi succeed with all his supposed efforts?