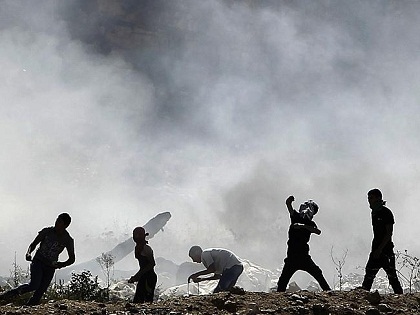 Eight Palestinians from annexed east Jerusalem were indicted on Monday for inciting anti-Jewish violence and supporting "terror" in postings on Facebook, a justice ministry spokeswoman said.

The eight men, aged 18-45, were charged at Jerusalem Magistrate's Court with "incitement to violence or terror and supporting a terrorist group" on Facebook, a ministry statement read.

The incriminating posts were put online in recent months as a wave of violence rocked the city during which several Palestinians staged lone wolf attacks killing nine people.

The defendants "directly called for violence and terror against (Jewish) citizens and security forces and praised, encouraged and supported these deeds and their perpetrators" on the Internet, the statement read.

Among the remarks posted online were "It is good to kidnap soldiers", "Zionists flee because you'll soon be killed by a car" and words expressing hope that a right-wing Jewish activist, who survived an assassination attempt in October, would die a painful death, the indictment said.

All eight were arrested earlier this month in what police said was their biggest operation yet aimed at halting incitement to violence on social networks.

Tensions in Jerusalem have since abated although clashes still erupt sporadically in the Arab eastern sector of the city which was occupied and annexed by Israel during the 1967 Six Day War.

what about those who were calling to kill all arabs? those who called for nuking gaza? oh they're god's chosen people so israel wont touch them