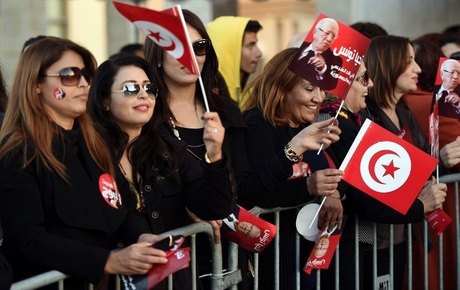 The European Union on Monday congratulated veteran Tunisian politician Beji Caid Essebsi on his victory in the country's first free presidential election, which it called a "historic" milestone on the country's path to democracy.

"Tunisians have written a historic page in the country's democratic transition," EU foreign policy chief Federica Mogherini said in a statement, adding that the 28-member bloc was committed to working with the new Tunisian authorities.

But in a sign of the challenges ahead, Tunisian police fired tear gas to disperse hundreds of youths who burned tires in protest at the result.

Mogherini lauded the landmark vote in the birth place of the Arab Spring, praising the Tunisian people who "sent a message of hope to all the people who, like them, aspire to a future that's more peaceful, democratic and prosperous."

Noting that the EU had sent an observer mission to monitor the election, she said the team would "continue its work in Tunisia and observe every step of the electoral process until its completion."