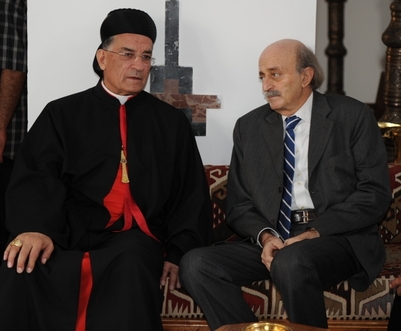 “I am without any doubt relieved for the dialogue between the two parties,” Jumblat said in comments published in An Nahar newspaper on Thursday.

He described the talks as a “great achievement,” saying: “This is what I have been calling for and worked on with Speaker (Nabih) Berri.”

Bkirki spokesperson Walid Ghayad told al-Mustaqbal newspaper that the patriarch welcomes the dialogue between the Sunni and Shiite parties and expressed hope it succeeds.

“The indications are positive,” Ghayyad said.

He remarked that al-Rahi “expressed relief over the talks,” considering it “a fundamental matter... that would facilitate reaching solutions for the deadlock in the country.”

Al-Mustaqbal and Hizbullah held their first, long-awaited meeting in Ain al-Tineh on Tuesday evening under the auspices of Berri, in an attempt to devise a “roadmap” and a “mechanism” for the coming dialogue sessions between the two parties.

A source close to al-Mustaqbal told An Nahar newspaper that both parties expressed willingness to go on with the dialogue for the longest period possible.

The source denied that the talks have a foreign agenda, pointing out that the lack of foreign solutions prompted the engagement in dialogue to safeguard the country.

There are five topics on the dialogue's agenda – defusing sectarian tensions and easing the political rhetoric, the anti-terror fight, the presidential vote, activating the work of institutions, and finding a new electoral law.

Lebanon has been without a head of state, since President Michel Suleiman's six-year term ended in May, over differences between the March 8 and 14 alliances.

Al-Mustaqbal is at odds with Hizbullah over its involvement in Syria's civil war. The party has sent its members to fight alongside troops loyal to President Bashar Assad against rebels seeking to topple him.

The movement has also repeatedly called on Hizbullah to hand over its weapons to the Lebanese state similar to what the country's militias did at the end of the civil war.

Normally people who sit like Jombie reflect an urgent need to pass to the toilet.