Jordan Vows 'all Efforts' to Save Pilot Seized by Jihadists 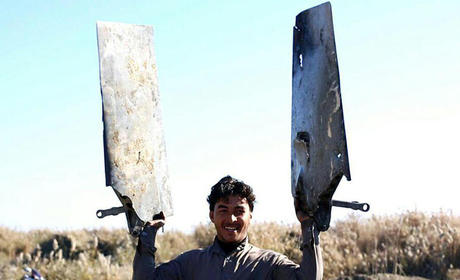 Jordan vowed Thursday to make every effort to save a pilot captured by the Islamic State group in Syria as Washington denied claims the jihadists had shot down his warplane.

Maaz al-Kassasbeh, a 26-year-old first lieutenant in the Jordanian air force, was captured by IS on Wednesday after his F-16 jet crashed while on a mission against the jihadists over northern Syria.

It was the first warplane lost and the first capture of a serviceman since the coalition launched strikes against IS in Syria in September.

It was also a major propaganda victory for the Sunni extremist group, which released several photographs parading the captured pilot.

"The Jordanian government... is making all efforts with several crisis cells to free (the pilot)," government daily Al-Rai said in an editorial Thursday.

"We are confident that our brave one will be released... He has not been forgotten."

Jordan, along with Saudi Arabia, the United Arab Emirates and Bahrain, has joined the US-led coalition carrying out air strikes against IS after it seized control of large parts of Syria and Iraq.

Kassasbeh's plane went down near the city of Raqa, which IS has used as its de facto capital and where coalition warplanes have carried out regular strikes.

The jihadists and the Britain-based Syrian Observatory for Human Rights claimed the plane was brought down by an anti-aircraft missile, raising concerns for other coalition planes flying in the area.

But the US military dismissed the claim, saying "evidence clearly suggests that ISIL did not down the aircraft", using another name for IS.

"We strongly condemn the actions of ISIL, which has taken captive the downed pilot," US Central Command chief General Lloyd Austin said in a statement.

"We will support efforts to ensure his safe recovery, and will not tolerate ISIL's attempts to misrepresent or exploit this unfortunate aircraft crash for their own purposes."

Jordan's parliament said in a statement Thursday that it would hold IS "responsible for safeguarding the life" of Kassasbeh, describing him as a "hero".

IS posted pictures online showing its fighters holding the pilot.

One showed a man being carried from a body of water by four gunmen. Another showed the same man on land, surrounded by almost a dozen militants.

The pilot's father was quoted by Jordanian media as saying the family had been informed by the air force of his capture.

He called on IS to show "mercy" on his son, who just married in July, and to release him.

Messages of support for the pilot flooded Facebook and Twitter under the hashtag "We are all Maaz al-Kassasbeh".

Analyst Mohamed Abu Rummaneh, from the University of Jordan's Center for Strategic Studies, said he did not expect Amman to reconsider its role in the US-led coalition against IS.

"A large majority of Jordanians -- nearly 90 percent according to polls -- consider Daesh (another name for IS) to be an enemy," he said.

But political commentator Labib al-Kamhawi said the government would come under pressure from its critics to pull out of the coalition "if, God forbid, anything adverse happened to the pilot".

An activist in Raqa said IS militants were divided over the fate of the pilot, with more extremist foreign fighters wanting him executed and others wanting him kept alive.

Jordanian Salafist leader Mohammed Shalabi denounced Amman's participation in the coalition, and warned the war on IS would lead to "deaths and injuries".

U.N. Secretary General Ban Ki-moon appealed for the pilot's captors to treat him "in accordance with international humanitarian laws", a statement said.

Despite the loss of the plane, the coalition carried out more strikes against IS targets, said the Observatory, which relies on a network of sources for its reports on Syria.

The monitor said four strikes were carried out late Wednesday against IS positions in Kobane, where Syrian Kurdish fighters have been holding off an IS offensive.

Several other coalition strikes hit Bukamal near the Iraqi border, it said.

Elsewhere in Syria, at least 44 IS fighters were killed in clashes with Kurdish militia in the northeastern Hasakeh province and in fighting in Kobane, said the Observatory.

Syria's conflict began in 2011 as a peaceful revolt against President Bashar al-Assad but evolved into a multi-front civil war that led to the emergence of IS and its expansion into Iraq.

I hope you are in peace flamethrower... RIP