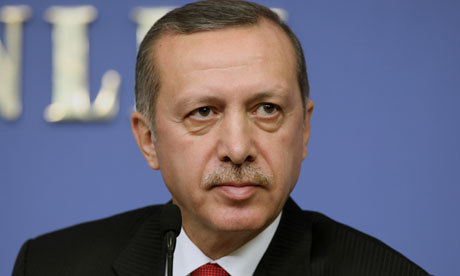 A 16-year-old high school student has been arrested in central Turkey for "insulting" President Recep Tayyip Erdogan by accusing him and his ruling party of corruption, sparking angry criticism on Thursday from the opposition.

The boy, identified by his initials M.E.A., was believed to be a member of a leftist organization, the Hurriyet newspaper reported.

He delivered a speech on Wednesday in the central Anatolian city of Konya, a bastion of Erdogan's Islamic-rooted Justice and Development Party (AKP), in memory of a young secular teacher killed by Islamists in 1930, according to the newspaper.

The boy, who was arrested by police at school, is now facing up to four years in prison if convicted on the charge.

It was the latest controversial arrest in Turkey in recent weeks. Recent police raids on media outlets affiliated with Erdogan's top foe, the US-based cleric Fethullah Gulen, sparked an angry exchange with the European Union, which said the arrests undermined media freedom.

"Everyone must respect the office of president whoever he is," Davutoglu said, quoted in Turkish media.

In his testimony to prosecutors, the boy denied links with any political party and said that the local governor's office granted permission for the commemoration ceremony organized through social media.

"I've made the statement in question. I have no intent to insult," he reportedly said.

The boy's lawyer, Baris Ispir, submitted a petition to the court, together with around 100 colleagues who came from Istanbul in a show of support.

"Even if he is convicted, he is 16 years old which requires a one-third reduction in his penalty," the lawyer said, according to the private Dogan news agency.

Riza Turmen, lawmaker of the secular opposition Republican People's Party (CHP), denounced the arrest as a violation of the U.N. charter on children's rights.

"Regimes taking children out of classes by police force and putting them in jail are fascist regimes," Turmen, a former judge at the European Court of Human Rights, wrote on Twitter.

"This goes against the U.N. charter on children's rights."

Turkey's government faced an unprecedented wave of protests in 2013 against what was seen as authoritarian policies from Erdogan, who was then prime minister.

The AKP government was shaken by a vast corruption scandal last December that dragged down four ministers facing accusations of bribery and influence-peddling.

Erdogan, who was elected president in August, angrily accused his former ally-turned-foe Gulen of concocting the graft scandal.

Thirty people were arrested in raids earlier this month against those deemed to have links to Gulen.

Most have now been released but a court has remanded in custody on terrorism charges the head of the pro-Gulen Samanyolu TV and three former police chiefs. It also issued an arrest warrant for Gulen himself.

In power since 2003, Erdogan has brought relative stability to Turkey after years of rocky coalition governments and an economic meltdown in 2001.

But what critics describe as his increasingly authoritarian style and zero-tolerance of criticism have proved a major test for democracy in the country which has long sought to join the European Union.

It seems the dictator Erdogan felt insulted from few insults made by a 16 year old boy.