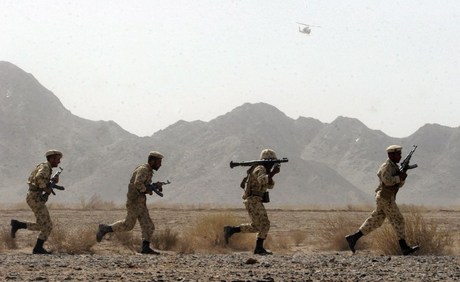 Iran launched extensive military drills on Thursday, local media reported, in a show of strength stretching several hundred kilometers from the Strait of Hormuz to the Gulf of Aden.

The exercises are set to last six days and involve ballistic missile and drone testing, according to military officials.

Close to 13,000 personnel will take part in the drills, which will be the first time Iran has organised military maneuvers so far from its coastline.

The southeastern provinces of Hormozgan and Sistan-Baluchistan will also be included in the tests, with the Iranian army, air force, navy and Revolutionary Guards participating.

"One of the aims of these maneuvers is to increase our defensive capability... and to transfer this experience to young" personnel, army chief general Abdolrahim Moussavi told state television.

The drills will finish with a military parade on December 30.

Last week Rear Admiral Habibollah Sayari called on foreign forces in the region to "leave the area" in order to avoid incidents.

The maneuvers will pose "no danger to foreign forces in the Persian Gulf," he added, in an apparent reference to the U.S. Fifth Fleet, which is stationed in Bahrain.

Iran's navy has boosted its international presence over the past few years, in particular to help guard commercial vessels in the Gulf of Aden from pirate attacks.