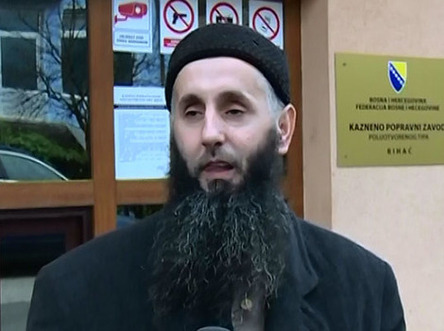 A radical Muslim cleric in Bosnia accused of encouraging his followers to fight with Islamic State militants in Syria and Iraq was charged with terrorism on Thursday, prosecutors said.

Husein Bosnic, from Buzim in the country's northwest, was arrested in September. Authorities said a number of his followers travelled to Iraq and Syria to fight alongside militants, with some killed there.

Prosecutors said in a statement that the 42-year-old was charged with inciting terrorist activities, the first case of its kind in Bosnia.

"After his public preachings, a large number of Bosnian citizens who are members of the Salafist community left Bosnia and joined terrorist groups such as the Islamic State group and committed terrorist acts," prosecutors said.

Bosnia in April adopted a law providing for sentences of up to 10 years in prison for jihadists and their recruiters.

Intelligence estimates in local media reports say some 150 Bosnian citizens are currently fighting with jihadists in Iraq and Syria, while around 20 have been killed. Around 50 are believed to have returned.