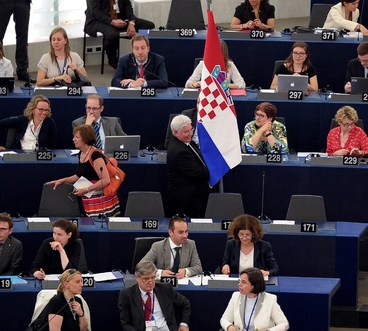 Croatia's atypical president, Social Democrat Ivo Josipovic, is running for re-election Sunday with an emphasis on the more conventional promise of restoring economic health to the European Union's newest member.

Josipovic, a former law professor and classical music composer, was elected in January 2010 to the largely ceremonial presidential post on vows to fight corruption and help Croatia attain EU membership.

When his country finally became the 28th member of the bloc in 2013, Josipovic celebrated by performing Beethoven's "Ode to Joy" in a televised piano appearance.

The 57-year-old, who enjoys a squeaky-clean political reputation, has consistently topped the three other contenders in the race in opinion polls.

His main rival is Kolinda Grabar-Kitarovic of the opposition conservative party, HDZ.

However, with none of the candidates expected to win an outright majority in balloting Sunday, a run-off round on January 11 is anticipated.

Josipovic is appealing to voters to maintain their trust in him as he struggles to boost the country's economy and implement institutional reforms.

"I based my first mandate on achieving two important goals: social justice and Croatia's full-fledged membership in the European Union," he said during campaigning, before turning to fresh challenges that must be addressed.

"Without reforming the state, the administration and the judiciary there will be no economic recovery," he said.

But critics say he failed to press the government to work harder on reviving the economy, which is expected to flatline in 2015 after six years of recession.

Detractors also complain Josipovic's neutral stance on many subjects as part of his effort to "remain on good terms with everyone" has made him ineffective at a time when the country needs emphatic and decisive action to move forward.

Grey-haired Josipovic has so far managed to weather that criticism, appearing calm in debates and refusing to be drawn out by rivals. Smiling benignly from behind his glasses, he often addressed his opponents as though lecturing his law students.

His temperate character and effort to find common ground with peers is not the only manner Josipovic has cut an unusual political profile.

Born in Zagreb where he attended music school, Josipovic graduated from the University of Zagreb with a law degree. He has represented Croatia before the International Court of Justice and the International Criminal Tribunal for the former Yugoslavia.

In 1980, he joined the League of Communists of Croatia and eventually played a role in its transformation into a European-style leftist party that was re-baptised the Social Democratic Party of Croatia.

Josipovic, who is married and has a daughter aged 23, quit politics in 1994 to devote himself to law and music, returning nine years later with a succesful bid for parliament.

Yet his resumed political career has not hindered his love for music.

After winning the presidency in 2010, Josipovic said he planned to write an opera on the life of John Lennon's murderer -- a project he has yet to finish due to his busy presidential schedule.

At the time he joked that he hoped the uncompleted opera would stand out as the only promise he has not honored since taking office.