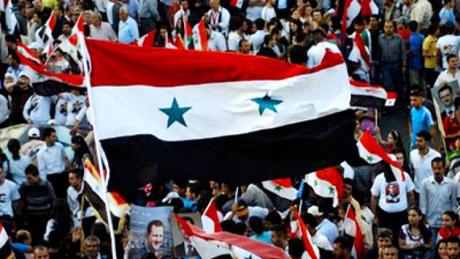 Syria's regime is willing to meet the country's opposition in Moscow to seek a way out of the nearly four-year civil war, a government official said on Saturday.

"Syria is ready to participate in a preliminary and consultative meeting in Moscow to respond to the aspirations of Syrians who are trying to find a solution to the crisis," the foreign ministry official said, quoted by SANA state news agency.

The decision followed talks between Syria and Russia about a possible meeting, the official said.

"The Syrian Arab Republic has always been ready for dialogue with those who believe in its unity, sovereignty and freedom of choice," the official added.

An estimated 200,000 people have been killed, and half the population have been forced to flee their homes.

Russia has been trying to relaunch peace talks that would include meetings between delegates of the regime and the fractured opposition.

The Russian foreign ministry declined to comment on Saturday.

But on Thursday, Moscow said that it planned to host delegations from the Syrian opposition in late January, possibly followed by a visit by regime representatives that could bring the two sides together for talks.

Assad has said he backs the efforts by his key ally.

However, the head of the main opposition National Coalition, Hadi al-Bahra, cast doubt on Russia's efforts in remarks he made in Cairo after meeting Egyptian Foreign Minister Sameh Shoukri.

"There is no clear Russian initiative, only an (informal) invitation to meet and talk in Moscow," Bahra told reporters.

He added that his group had not received any formal invitation to talks in Moscow.

He said, however, that the National Coalition had begun talks with "other Syrian opposition groups", which he did not identify, in Cairo and elsewhere.

During these discussions "each side presents its views, and I don't see wide gaps between these views," Bahra said.

"There are small differences concerning the mechanism to reach a political solution."

On Wednesday an opposition figure tolerated by the Syrian regime said that dissidents would meet in Cairo to discuss ways to end the war.

"Several opposition groups and individuals have been in talks for more than two months, and we have been in contact with them to try to reach a joint vision to solve the crisis," said Munzer Khaddam of the National Democratic Body for Democratic Change.

A "national gathering" is planned in Cairo, followed by a second meeting in Moscow, Khaddam told AFP without giving a timetable.

Earlier this year the National Coalition and other opposition groups met Syrian government representatives in Geneva.

But they collapsed as the opposition demanded Assad's resignation, while the regime insisted the main focus of the negotiation should be on fighting "terrorism".

Since then, some opposition figures have suggested that a deal could see Assad remain in power for a limited time.

The change in tone reflects growing concern over advances by jihadists who have expelled more moderate opposition rebels from large areas.

Foreign fighters have flocked to join Al-Qaeda-linked militants and the Islamic State (IS) group which led an offensive that seized large parts of Syria and Iraq, committing widespread atrocities.

A monitoring group said Saturday that IS had lost ground in the Syrian town of Kobane, where Kurdish fighters now control more than 60 percent of territory.

The strategically located town on the border with Turkey has become a major symbol of resistance against IS.

The jihadists launched a major offensive in mid-September to try to capture Kobane, and at one point controlled more than half of the town, known in Arabic as Ain al-Arab.

But supported by US-led air strikes and reinforced by Kurds from Iraq, "Kurdish forces now control more than 60 percent of the city", said Rami Abdel Rahman, director of the Britain-based Syrian Observatory for Human Rights.

"IS has even left areas that the Kurds did not enter for fear of mines," he added.

(2). The only way out for Syria is to understand and accept that THE only solution is dialog and compromise. If they do not engage each other in serious talks and accept that they won't go an inch forward with war, then Syria is doomed to fare a lot worse than we Lebanese did.

(1). The Syrians are usually termed as Bnadi2 Tamarlank, meaning that they are viewed as smart, savvy and sharp. But their fratricidal war now going past 3 years has shown that the Syrians who were our ruthless occupiers for 3 decades have learned absolutely nothing from us Lebanese who spent a good 15 killing each other and destroying the pearl of the east into dust. 15 years, and where did it take us but ultimately around the table of compromise and dialog? Syria's war dwarf's ours in comparison, for all intents and purposes no one is going to step in and save the Syrians from themselves. Their war could drag on forever annihilating anyone remaining standing, to the point where the Jihadists will take it all from the Syrians.

Never trust these baathist and their bearded masters in iran nor trust the bearded crazies from isil and their masters in KSA and beyond. Syria is doomed

nassrallah said assad is a redline

If the majority of Syrians were against Assad, he would've been long gone. Since that is not the case, he will stay President.

Mystic you are a genius amongst your kind, you hit the nail on the head. And following that inspired logic of yours the majority of Iraqis, including the Shiites and Kurds he was gassing for fun, were not against Saddam, as he would still be president without Dubya and his American invasion wouldn't he.

Yeah Southern you are, unlike your Mystic friend, your analysis and figures, whilst debatable and not wholly accurate, are consistent and relevant.

@MyASStic, If someone says something stupid at work, we call them pretty, and you're the best looking of the bunch.

Bahrain will probaly end up like Yemen soon. The people there, has been opressed for so long, by the tyrannical monarch regime.

It it a major defeat for you guys, that Assad remained President, and Syria didn't fall after the 3 months you predicted.

M14 are beginning to loose hope, because if Syria does not fall. The Resistance wont fall aswell. That was your biggest hope with this false "revolution" You failed boys, now you can bend down and sit, kiss the boots of the Resistance.

Hehehe that's what nouri el maliki and his iranian handlers thought just about this time last year. And shouldn't you be worried about the invasion on Brital, Younine, al-Labweh, Nabi Othman, Fakiha, rather that dotting advise to m14. You remind me if all those poor gullible brainwashed souls who in 2006 were litering to roads heading north sleep deprived packed 15 into that old stationwagon with a mattress attached to the top mindlessly repeating totv cameras the old dogma that hezballah protects them while their actions obviously tell the opposite of that.

Ready to meet in Moscow, so the opposition leaders can all be arrested???

It is clear that Bashar al-ASSad’s upbringing and environment in which he was raised has had a significant impact on his development into the ruthless dictator that he is today. If we examine the childhoods, or what is known of them, of other dictators and mass murderers we find similarities with al-ASSad.