Residents of Bekaa Valley Demand to Take Up Arms against Gunmen 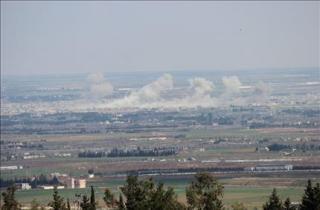 Residents of the Bekaa Valley are reportedly demanding to take up arms, fearing an expected attack by fighters from the Islamic State of Iraq and the Levant on New Year's eve.

According to Ad Diyar newspaper published on Sunday, the residents of Brital, Younine, al-Labweh, Nabi Othman, Fakiha, Ras Baalbek and al-Qaa are calling on the state to arm them to foil any attack by terrorists.

Media reports said on Saturday that the recent infiltration attempts by gunmen into the northeastern border region of Arsal as a sign that these forces are seeking to break the army's siege of the area.

The nearby border is long and porous, and has proved an easy crossing point for smugglers, refugees and fighters.

Tens of thousands of Syrian refugees are being hosted in the town, and opposition fighters have bases in the mountainous border area outside Arsal.

The town was overrun briefly in August by al-Nusra Front and Islamic State group jihadists coming from Syria, who withdrew after several days of fighting.

They took with them some Lebanese policemen and soldiers as hostages, and have since executed four of them.

Sources told Ad Diyar newspaper that security forces have upped measures around Rihaniyeh military prison and Roumieh jail after obtaining information that gunmen will target them with attacks.

The daily said that the Qaida-linked Abdullah Azzam Brigades will attack several check points near the two facilities in order to free Islamist prisoners.

Dozens of Islamist inmates are held in Roumieh. They are awaiting trial for their alleged involvement in the clashes between Fatah al-Islam terrorist group and the Lebanese army in the Palestinian refugee camp of Nahr al-Bared in 2007.

The Army should create some civil defense units, around the Bekaa & Baalbek areas, to counter any takfiris coming through. They did the same in Syria, and it works quite well.

Ebola is a foreign army receiving money and weapons from foreign sources, under foreign orders. They are no longer lebanese.

is that a khoneini jihadi terrorist in your avatar?

you are stupid. We want that arms are held solely by the army and that the state increase its legitimacy everywhere in lebanon. What are you proposing? have you not learned from the lesson of the past civil war

M14 and the ISF wants to take the peoples weapons, and right to defend themselves. Do you expect them to sit down and let the takfiris slit their throats?

No ofcourse people should defend themselves and their families, just like you wanted the Resistance to sit down and die during the 2006 war.

No it wont happend, thank god for the Resistance in Lebanon. Otherwise this state would've turned out to be a province of ISIS because of you guys.

You would gladly hand Israel/ISIS and Nusra, the arms of this country and surrender. That's the M14's plan all along, we know.

Mystic - You had the genesis of a reasonable idea but had to ruin in with a stupid comparison to the thuggish militias in Syria that are responsible for mass war crimes and then go on a dishonest tirade against M14 and the Internal Security Force that is tasked with protecting the internal security of Lebanese. Any force must be under the direct control of the state and cannot be independent actors or beholden to foreign power. Anything else is non-sustainable in the long term and will not be acceptable to a large portion of the Lebanese public.

M14 & ISF protecting Lebanese people? Is that a joke ArabDemocrat?

We have seen countless times, the M14 urging support for the takfiri millitants, and the ISF even smuggled some Al Nusra women across the border.

The people of this state, has the right to defend themselves, if the takfiris dare to come and massacre them. That is why I believe the LAF should take part in this matter, and arm these citizens.

Mystic - You are either an unabashed liar or delusional to claim that the ISF or M14 are supporters of Takfiris. LAF should not take part of arming civilians. The government should form a well controlled reserve force that is answerable only to the state. The state should not share its role or sovereignty with any other actor.

FT - The Hagganah built a state and institutions of a state. When the Irgun attempted to challenge these and to import weapons, they were crushed by the Haganah which enforced a unity of arms and a single decision-making body. The mainstream Zionists may be brutal and may be thieves but they understood what it took to build a state. If they allowed multiple militias to form, there would not have been a state.

Everyone in M8 knows, Rifis rangers the ISF are here in Lebanon, to provide "Legal" umbrellas and protection to the armed takfiri militias inside and out of Lebanon.

Mystic - It seems that according to you everyone in M8 is a delusional person.

bigjohn - I agree with you and that starts with building strong institutions and first most among them are the army and the institutions of governance and the strengthening of representative, democratic governance. Easy words - hard tasks.

Residents of Brital want to be armed? hah arent those guys already armed?!

i can assure you on the tomb of my son hadi and on the integrity of zeynib and the conscience of imamu ali that we are here to protect lebanon and not the shias.

hassan al nass nass (Guest) 19 hours ago 00
i can assure you on the tomb of my son hadi and on the integrity of zeynib and the conscience of imamu ali that we are here to protect lebanon and not the shias.

This report cannot be true, it's aldyar after all the newspaper that first claimed that hezballah asked abdallah azzam brigades to whack jumblat.. Besides hassan in all his anointed turbaned glory pledged that when hezballah went to syria the islamists won't come here, of course he said that from the safety within his hiding place deep under the dahieh catacombs.

Thank you M14, for handing out umbrellas, and dollars to the takfiris.

Really you are complete habileh....everything you write is total satlanets...go somewhere else where you can spread your Ebola.

Ebola wants to enforce a new Pact. A Mutalateh. To this end, it needs to destroy the existing system: constitution and institutions thus creating void. To make it even worse and block the country without presidency they have a simple and easy tactic : name the caporal as their candidate. They know very well how to use his mental deficiencies. The Caporal will play his "role" and while doing it will serve his masters who are pulling the cords.

actually hizbollah does not care about mutalateh. All it wants is a weak state, an laf that takes its order from hizbollah, syria and iran. that is why all the strong leaders and intellectual opposing the iranian plot have been killed one after the other.

The Army can't be stationed everywhere, they will be spread too thin. Which is why these villages, should be armed and given proper training in order to defend themselves, against such assaults from the takfiris.

Something like the National Defense Force in Syria, or Resistance Brigades. Whilst the Army & Resistance fights the takfiris, the residents of border towns should be armed, incase of a takfiri breakthrough in Arsal.

System barely works in Lebanon at all, that is why we have these residents scared, they see how the LAF gets slaughtered by the takfiris, ofcourse the fear they will suffer the same faith, if the takfiris takes control of any villages.

They have a right to defend themselves, if they get attacked, light illegal weapons wont work, because we will see the ISF jump hard on them, if they do any resistance of any kind.

Really you are complete habileh....everything you write is total satlanets...go somewhere else where you can spread your Ebola.

Go and Mastic some hash, you must be used to it.

- Shatah's last tweet, an hour before he was assassinated

I respect Mr. Mystic, Mr. Flamethrower, and Mrs. Southern equally for their knowledge of military strategy and armament.

- Shatah's last tweet, an hour before he was assassinated

Hooray for QAWMIBIGJOHN hooray there he using the SAME old arguments OVER AND OVER for decades by collaborators (NO not Israeli collaborators, but worse..those who collaborate with the Arafat's terrorists and the Syrian occupation that made Israeli aggressions POSSIBLE-militarily, economically, and politically)!, by attacking the LEBANESE STATE right to exists the one that was created by the WESTERN COLONIAL ZIONISTS by annexing sovereign SYRIAN TERRITORY and giving it to it's allies the MARONITES! He even managed to do that with even mentioning once the SYRIAN occupation, because you can't OCCUPY what is YOURS!

Of course Rifi would rather let them die.