Taiwan Kicks Off Plan to Build Its Own Submarines 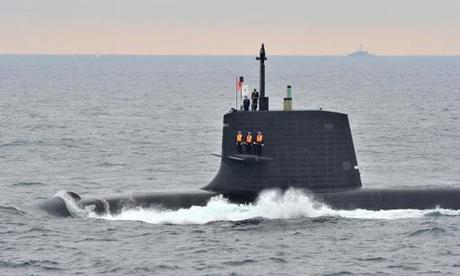 Taiwan said Monday it was launching a project to build a fleet of its own submarines, after years spent waiting in vain for U.S. models.

"This means the military has officially kicked off the self-built submarine project," legislator Lin Yu-fang, who sits on parliament's defense committee, said in a statement.

Under a four-year contract, work on the design is slated to begin in 2016 and cost an estimated Tw$3 billion ($94.46 million). Preparatory work will begin in 2015 with an approved budget of Tw$10 million.

It was unclear when work would start on building the submarines.

Vice Admiral Hsiao Wei-min, also speaking in parliament, ruled out a recent suggestion from a U.S. think tank that Taiwan could build a fleet of 42 120-ton mini-submarines.

Chiu did not specify who was in line for the design contract. But military sources said it should be given to a team composed of Taipei-based Ship and Ocean Industries R&D Center, the CSBC Corporation Taiwan and foreign technology advisers.

In April 2001 then-U.S. president George W. Bush approved the sale of eight conventional submarines as part of Washington's most comprehensive arms package to the island since 1992.

Since then, however, there has been little progress. The United States has not built conventional submarines for more than 40 years and Germany and Spain have reportedly declined to offer their designs for fear of offending Taiwan's rival, China.

Taiwan is running out of patience over the long-stalled U.S. offer to supply eight submarines, since China has been fast expanding its own military.

The Taiwanese navy currently operates a fleet of four submarines, but only two of them can be deployed in the event of war. The other two were built by the United States in the 1940s and are too old for combat.

Tensions between Taiwan and China have eased markedly since President Ma Ying-jeou came to power on a platform of strengthening trade links and allowing more Chinese tourists to visit. Ma was re-elected in January 2012.

But Taiwan, which has governed itself since 1949, still sees a need to modernize its armed forces because China regards the island as part of its territory awaiting reunification -- by force if necessary.