U.S. Anger at Raising of Taiwan Flag in Washington 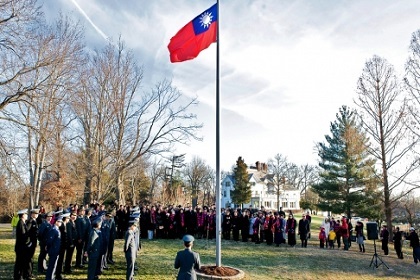 The United States on Tuesday denounced a flag-raising ceremony at Taiwan's de facto embassy in Washington, saying it violated a long-standing pact on U.S.-Taiwan ties.

"We're disappointed with the action," State Department spokeswoman Jen Psaki said when asked about the hoisting of the Taiwanese flag at the compound on New Year's Day.

The United States has long held a one-China policy, and as such does not have full diplomatic relations with Taiwan, the island Beijing claims as a renegade territory.

Instead, Washington has a representative office in Taipei, while Taiwan maintains a representation at a luxury estate in the U.S. capital known as Twin Oaks.

Taiwan's English-language daily the China Post said the island's flag was raised over the building on Thursday, for the first time in 36 years since the U.S. switched diplomatic recognition from Taipei to Beijing in 1979.

Psaki stressed however that the U.S. administration had not been informed in advance of the move.

"The flag-raising ceremony violated our longstanding understanding on the conduct of our unofficial relations," she told reporters.

"We have a robust set of cultural relations, but we do not have diplomatic relations."

U.S. officials in Washington and Taipei were discussing the issue with their Taiwanese counterparts, she added.