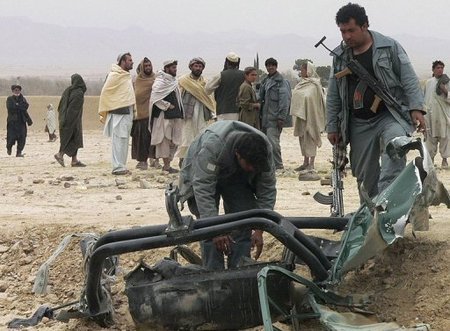 In the first blast, Assadullah Khalid, minister of border and tribal affairs and chief security coordinator for the south, claimed he was the target as two civilians were killed.

But the interior ministry said there was no evidence the blast was aimed at Khalid and he himself admitted he was five kilometers away when it happened.

"There was an explosion -- a suicide bomber wearing explosives on his body detonated in an area where there was not an obvious target," interior ministry spokesman Siddiq Siddiqui told Agence France Presse.

The Kandahar provincial media office said one person was killed and 19 injured, including six children. But Siddiqui and local police chief Abdul Raziq put the death toll at two.

Shortly afterwards in a different part of the city, a suicide bomber wearing army uniform struck inside an army garrison.

"It was a suicide attack that killed one guard and the attacker, two army soldiers were wounded," said General Abdul Hamid, commander of the army unit whose garrison was struck.

It is relatively easy to buy army uniforms from Afghan markets and there have been a string of attacks this year committed by attackers wearing them.

Kandahar is seen as the birthplace of the Taliban.

Karzai's brother, a key figure in the south and head of Kandahar's provincial council, was killed at his home in the city on July 12.