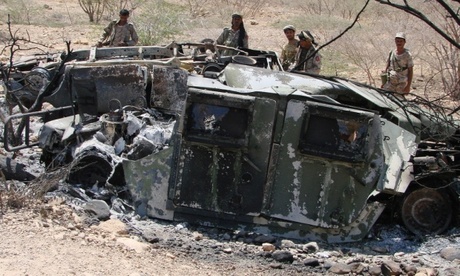 He said the drone, which only the United States operates in the region, targeted "a gathering of al-Qaida fighters" between the village of Qatan and the town of Shibam, killing four and wounding several others.

It was the fourth drone strike since U.S. President Barack Obama vowed on January 25 not to let up in Washington's campaign against jihadists in Yemen despite the country's political turmoil.

Shiite militiamen last month took control of key government buildings in Sanaa, prompting Western-backed President Abedrabbo Mansour Hadi to tender his resignation and the militia to take over the government.

Al-Qaida said Thursday that Harith al-Nadhari, a senior figure who threatened more attacks on France after last month's killings at satirical magazine Charlie Hebdo, had died in a U.S. drone strike in Yemen.