2,000 Hungarians Protest in Budapest on Eve of Putin Visit 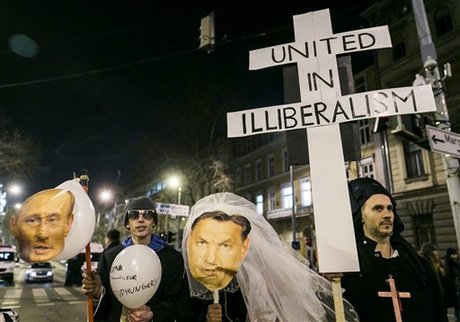 Hundreds of Hungarians took to the streets of Budapest on Monday to protest against Vladimir Putin, a day ahead of the Russian leader's visit to Budapest.

According to an Agence France-Presse photographer, around 2,000 people marched between the capital's two main train depots, the Eastern and Western stations.

Organizers told AFP the east-to-west route symbolized Hungarians' desire to remain rooted to the West rather than Russia.

"We resent that (Prime Minister Viktor) Orban is making a fool out of Hungary by inviting Putin here to do secret deals while there is a war next door in Ukraine," Marton Gulyas, one of the organizers, told AFP.

"I lived most of my life under communist rule, I don't want this country to fall under Russian influence again," said 67-year-old protestor Maria Toth, standing behind a banner reading: "Putin Nyet (No)! Europe Yes!"

Putin is due to arrive on Tuesday and will hold talks with Orban in an apparent effort to show he has a friend inside the European Union and NATO.

"This trip is clearly more important for Putin than for Orban," Andras Racz, analyst at the Finnish Institute of International Affairs, told AFP.

"Putin can demonstrate to other Western countries that he has an ally which is an EU and NATO member, that European unity is not that strong after all," Racz added.

The controversial visit comes as the world waits to see if the ceasefire agreement reached last week in Minsk between Kiev and Russian-backed rebel forces will hold in Ukraine.

Putin, on his first visit to Budapest since 2006, might also try to put pressure on Orban to stall further European sanctions against Russia.

Hungary supported the European Union sanctions on Russia, but has been vocal about their negative impact.

Last year, Orban said the 28-nation bloc had "shot itself in the foot" by damaging commercial relations with Moscow.

Gaining prominence with a strong anti-communist and anti-Russian stance as a student leader during communism's waning days in the late 1980s, Orban is now considered one of Putin's closest European allies.

The Hungarian leader wants to negotiate a flexible long-term gas supply agreement with Russia as the current one expires this year.

During a visit to Moscow last year, Orban signed a 10-billion-euro ($12-billion) loan deal with the Kremlin to expand Hungary's sole nuclear plant.