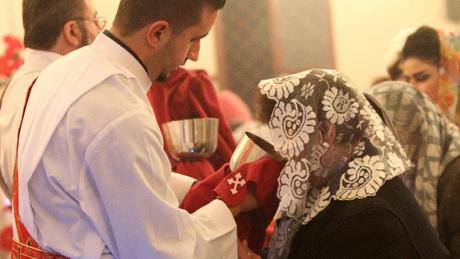 The kidnapping of dozens of Assyrian Christians by the Islamic State jihadist group in Syria has prompted an exodus of terrified families fleeing their homes, activists said Wednesday.

The United States condemned the mass abduction of Christians -- the first of its kind in the war-torn country -- and demanded the release of the 90 hostages.

About 800 families have taken refuge in the city of Hasakeh and 150 in Qamishli, a Kurdish city on the border with Turkey, Edward said, adding that the number of displaced individuals came to about 5,000.

Most of the hostages were women, children or elderly, he added.

Edward told AFP he believed the mass abduction was linked to the jihadists' recent loss of ground in the face of U.S.-led coalition air raids against IS that began in Syria in September.

"IS has been losing territory because of the international coalition's strikes and they took the hostages to use them as human shields," the activist said.

The jihadists, who are battling Kurdish fighters on the ground, may try to exchange the Assyrian Christians for IS prisoners, according to Edward.

He said the aim of the jihadists is to take over the Assyrian Christian village of Tal Tamer, which is located near a bridge over the Khabur river that links Syria to Iraq.

According to the Syrian Observatory for Human Rights, Kurdish fighters battling the jihadists on Wednesday recaptured three Assyrian villages and a nearby Arab village.

But fighting continues in the area, he added.

In Tal Shamiran, the jihadists burned down part of a church.

And in the Arab village of Ghbeish, IS decapitated four men, and burned down several houses and a school. They accused the villagers of "collaborating" with the Kurdish fighters.

IS, which also holds swathes of Iraqi territory, last year declared an Islamic "caliphate" in areas under its control and has committed widespread atrocities.

Assyrian Christians, who are from one of the world's oldest Christian communities, have been under increasing threat since IS captured large parts of Syria.

Last week, the IS branch in Libya released a video showing the gruesome beheading of 21 Coptic Christians, mostly Egyptians.

Edward, a native of an area of Hasakeh province where 35 Assyrian villages are located, said the jihadists broke into houses during the night while everyone was asleep.

He also said the hostages were taken to Shaddadi, an IS provincial stronghold.

The jihadists had been intimidating the Assyrian villagers for weeks, he said, including by threatening to remove crosses from their churches.

"People were expecting an attack, but they thought that either the Syrian army -- which is just 30 kilometers (20 miles) from there -- or the Kurds or the (U.S.-led) coalition's strikes would protect them," Edward said.

The United States on Wednesday condemned the abductions as "brutal and inhumane".

"ISIL's latest targeting of a religious minority is only further testament to its brutal and inhumane treatment of all those who disagree with its divisive goals and toxic beliefs," State Department spokeswoman Jen Psaki said, using another acronym for IS.

"To bring an end to these daily horrors, we remain committed to leading the international coalition to degrade and defeat ISIL."

The Syrian Catholic Archbishop of Hasakeh-Nisibi meanwhile accused Turkey of allowing jihadists responsible for the persecution of Syrian Christians to cross its border unchecked, while preventing Christians from fleeing the conflict.

"In the north, Turkey allows through lorries, Daesh (IS) fighters, oil stolen from Syria, wheat and cotton: all of these can cross the border but nobody (from the Christian community) can pass over," Jacques Behnan Hindo told Vatican Radio.

There were 30,000 Assyrians in Syria before the country's conflict erupted in March 2011. At that point Syria had an estimated total Christian population of about 1.2 million people.

time for the christian syrians to take weapons and defend ourselves. Like the Lebanese resistance (the true one) did in the 80s.

portugirl, geagea is not in the government and hariri was out of it for the first three years of the chaos in Syria. So the government of Lebanon that supported and promoted the chaos in Syria was the Nasrallah apoited government with ten ministers from Aoun's block.
Syria's propaganda department must be desperate hiring people like you who have no idea what they are talking about.