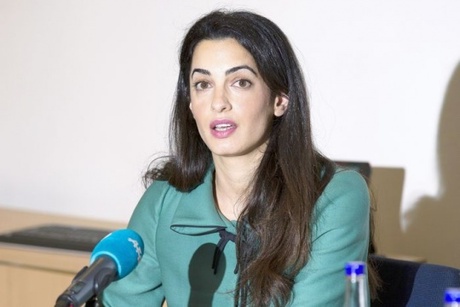 In a scathing rebuke of Prime Minister Stephen Harper's government, Clooney said diplomats had made only "sheepish whimpers" to Cairo instead of the required concerted efforts to secure her client's return.

Canadian reporter Fahmy faces a fresh trial in Egypt over accusations that he supported the blacklisted Muslim Brotherhood movement in his news coverage with colleagues, a charge he has rejected as absurd.

A court freed Fahmy, Egyptian producer Baher Mohamed and other defendants on bail earlier this month after they spent more than 400 days in prison.

One of the defendants, Australian Peter Greste, was deported under a recent law that allows the transfer of foreigners on trial to their home countries.

Clooney, who is married to Hollywood star George Clooney, said she had expected Canada to negotiate a similar repatriation deal with Egypt for her client.

Canada had previously indicated that Fahmy's release and return was "imminent" but it had not happened, Clooney said in a statement.

"So what did Canado do? It published a short written statement by a junior minister calling the situation 'unacceptable' and asking for Fahmy's 'full and immediate release' and 'consideration of a general amnesty'," Clooney wrote.

"Such sheepish whimpers are woefully inadequate when it comes to enforcing an agreement reached with a sovereign state regarding a citizen's release from detention," she added.

"Canada should now begin real advocacy to ensure that Egypt honors its agreement to release Mr Fahmy from Egypt. There is no legal impediment to his immediate transfer to Canada.

"Yet calls from Canadian society and politicians for Prime Minister Harper to pick up the phone to personally intervene in the case have so far fallen on deaf ears."

Fahmy, Greste and the other defendants had initially been sentenced to up to 10 years in prison.

An appeals court ordered a retrial in January, saying the verdicts had not been supported by evidence.

The journalists were arrested in December 2013 during a crackdown on supporters of ousted Islamist president Mohamed Morsi.

Their initial trial came against the backdrop of strained ties between Egypt and Qatar, where Al-Jazeera is based and which supported Morsi.