Toll in Philippine Clashes with Islamists Rises to 26 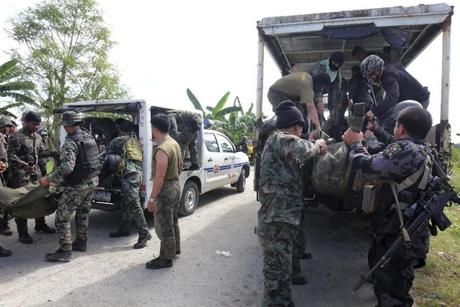 A military assault on Islamic militants in the southern Philippines entered its fifth day on Saturday, with the toll rising to 24 guerrillas and two soldiers dead, officials said.

Ten Abu Sayyaf militants were killed in a two-hour clash on Friday after the army pounded their jungle lair on Jolo island with artillery and helicopter gunships, said Colonel Alan Arrojado, who is leading the assault.

Another 14 rebels and two troops had been killed since the fighting erupted on Tuesday, he said.

Battles were raging in the mountainous and thickly forested villages of Patikul town, an area controlled by Abu Sayyaf, a group of a few hundred gunmen with links to the Al-Qaeda network.

"This (assault) will not stop until we put an end to the Abu Sayyaf," Padilla said.

The Malaysians have been "monitored for some time" he said.

The Abu Sayyaf in the past have harboured JI militants, including Umar Patek and Dulmatin, key suspects in the 2002 Bali nightclub bombings that killed 202 people.

The group is currently holding at least seven hostages, according to the military.

A German couple that they had held captive for six months were freed in October last year with the bandits claiming they were paid 250 million pesos ($5.7 million) in ransom.

Despite receiving training assistance from the United States, the Philippines has struggled to contain the Abu Sayyaf, whose leader last year pledged allegiance to the Islamic State.

Founded in the 1990s with seed money from Al-Qaeda, the Abu Sayyaf gained international notoriety for kidnapping foreigners for ransom.

The hefty ransom payments enable the group to fund attacks and replenish its forces from impoverished Muslim communities in southern regions of the largely Catholic Philippines.

The group was also blamed for the worst terror attack in the country, the 2004 firebombing of a ferry off Manila Bay that killed more than 100 people.