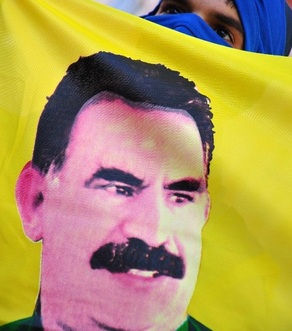 The jailed leader of the Kurdish Workers' Party (PKK) on Saturday made a "historic" call to the separatists to hold a disarmament conference, a key step in efforts to end Turkey's 30-year Kurdish insurgency.

"As we are ushering the 30 years of conflict towards permanent peace, it is our primary goal to reach a democratic solution," Abdullah Ocalan said in a message relayed by Peoples' Democratic Party (HDP) lawmaker Sirri Sureyya Onder.

"I'm calling on the PKK to hold an extraordinary congress in spring to make a strategic and historic decision on disarmament," Onder quoted Ocalan as saying in a joint press conference with Deputy Prime Minister Yalcin Akdogan.

"This is a historic call to replace armed struggle with democratic politics."

Onder said that both sides were "closer than ever to peace."

The message came after an HDP delegation met with PKK rebels for talks at their base in the Kandil Mountains in Iraq on February 23 and met Ocalan himself on his prison island of Imrali on the Marmara Sea on Friday.

The press conference was of significant importance because it was the first time a message by Ocalan was read live on television and in the presence of Turkish government officials.

Akdogan emphasised the importance of a ceasefire and said: "We have reached an important and historical point in the peace process."

"Silencing arms will contribute to the development of democracy," he said.

In 2013 Ocalan called for a "historic" ceasefire, after many months of secret negotiations with the Turkish government aimed at ending a conflict that has killed more than 40,000 people since 1984.

But peace talks stalled in September 2013, when the insurgents said they were suspending their pullout from Turkish soil after accusing Ankara of failing to deliver on promised reforms.

Government officials have recently stepped up efforts to restart talks with the Kurds and have met with their representatives in the hope of reaching a disarmament deal with separatist rebels by Kurdish New Year in March.

The new efforts come against the backdrop of a contentious security bill -- currently being debated in parliament -- boosting police powers to crack down on protest.

The bill, which was introduced after deadly pro-Kurdish protests in October, risks jeopardising the fragile peace process with the outlawed PKK if passed.