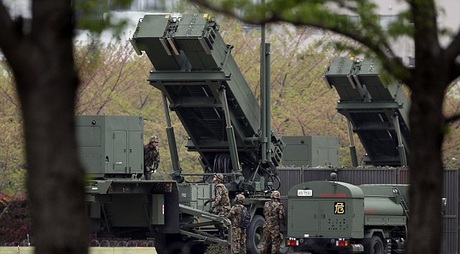 North Korea may be readying to test fire a medium-range missile to underscore its anger over joint U.S.-South Korea military drills that began this week, a report said Tuesday.

"We've detected signs that North Korea has deployed two transporter erector launchers since a few days back in its Rodong missile station in North Pyongyang Province," one source was quoted as saying.

That test was timed to coincide with U.S. President Barack Obama hosting a landmark Japan-South Korea summit to discuss joint security concerns in the face of Pyongyang's nuclear threat.

The South's defense ministry refused to confirm the Yonhap report, but said it was monitoring the situation.

"We've stepped up our surveillance in cooperation with the United States, and put the crisis management system into operation," he said.

North Korea fired two short-range Scud missiles into the sea off its east coast on Monday as South Korea kicked of a series of joint military drills.

The annual exercises always trigger a surge in military tensions and warlike rhetoric on the divided peninsula.

U.N. resolutions ban any ballistic missile test by North Korea, and Seoul has vowed to respond "sternly and strongly to any provocation".

Missile tests have long been a preferred North Korean method of expressing anger and displeasure with what it views as confrontational behavior by the South and its allies.

The largest element of the two South Korea-U.S. drills that began Monday is Foal Eagle, an eight-week exercise involving air, ground and naval field training, with around 200,000 Korean and 3,700 U.S. troops.

The other is a week-long, largely computer-simulated joint drill called Key Resolve.