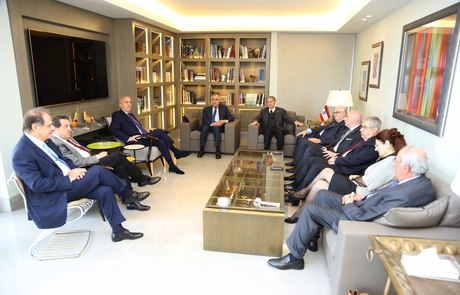 A number of ministers noted on Tuesday that the role of the cabinet “will remain crippled” in light of the presidential vacuum.

Tuesday's meeting was the third for the consultative gathering and it included head of the Kataeb Party Amin Gemayel and a number of ministers.

The gatherers said: “The government must run the affairs of the state and people and some parties should not try to usurp the presidency's powers while other parties must not take advantage of them to paralyze its work.”

They therefore called on Salam to continue on “preserving the atmosphere of consensus in taking decisions at cabinet, resolving disputes, and approving decrees.”

They also stressed the need to cease “demanding the election of a president and instead work on staging the polls as soon as possible.”

They held those “obstructing quorum at parliament during the presidential elections sessions” responsible for the vacuum, “which is threatening Lebanon's future and political system.”

Lebanon has been without a president since May when the term of Suleiman ended without the election of a successor.

On Monday, Kataeb Ministers Sejaan Qazzi, Alain Hakim and Ramzi Jreij met with Salam to brief him on Gemayel's keenness on the work of the government.

The ministers also inquired the PM on the latest amendments to the cabinet's working mechanism, it added.

This is the third meeting that the grouping holds. It had previously rejected the amendments called for by Salam over fears they would erode the president's powers amid a vacuum at Baabda Palace.

The government held its first session last Thursday after a three-week standstill caused by the differences on the mechanism.

Salam had suspended the sessions pending a deal among the cabinet ministers to amend the formula.

The cabinet finally convened after the ministers agreed that regular decisions would be made by consensus, but would not necessarily require the consent of all the ministers.

This removed the veto power that the ministers had been exercising under the previous mechanism.

As for the cabinet decrees, they will be presented to all the ministers for signature. They become effective after 15 days as stipulated by the constitution if one or several ministers refuse to sign them.

If hopeless = failed, then Suleiman would make the perfect host for this lot.