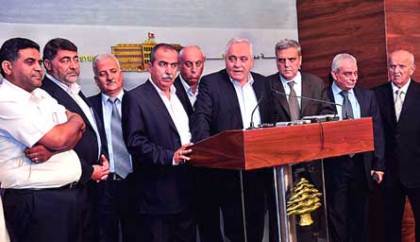 In remarks to local radio stations, Ghosn said: “We were asking for a boost in all wages, particularly for those earning more than LL1.8 million.”

But the government did not boost the wage of workers who earn more than LL1.8 million.

The GLC was planning to hold a nationwide strike on Wednesday but it suspended its move “for the sake of civil peace” after a deal was reached in the cabinet. It was initially calling for more than doubling the minimum wage to LL1,250,000.

Despite the government’s approval of the increase in salaries, several ministers clashed over the deal which the representatives of Free Patriotic Movement leader Michel Aoun saw as a “tranquilizer” not aimed at finding a radical solution to the wage dispute.

“The government was on the verge of collapse over the big dispute on the demands of labor unions,” Ghosn said.

The GLC will follow up the government decision to ensure that it would be implemented this month, he added.

then why the hell did you cancel your strike??? wuss!!!!

he canceld the strike because he received the order from above... don t forget he is the puppet of....!!!

Ghassan Ghosn is a puppet of the crooks Berri and Hizb. He gave cover to Amal/Berri and Hizb when they attacked M14 peaceful areas. A crook working for crooks and Aoun is the idiot cheerleader.

This was all a mascarade staged by syrian stooges to give a victory to a syrian government. That has always been the syrians tactics. Create the problem and waive its solution victoriously.
3a miiiiiiiiiin???
3ala aoun! hahaha
did that loser get anything from that government? not even his electricity bill was passed the way he wanted it. FPM had reservations on the bill they presented!!!

See the big picture... with this increase, now all prices are gonna skyrocket...