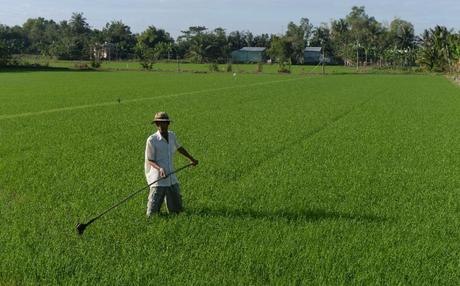 Rice farmer Nguyen Hien Thien is so busy growing his crops that he has never even visited Can Tho, a town only a few miles from his farm in the southern Mekong Delta.

"When I was a child, we grew one crop of rice per year -- now it's three. It's a lot of work," 60-year-old Thien, who has been farming since he was a child, told Agence France Presse on the edge of his small paddy field.

Experts say Vietnam's drive to become one of the world's leading rice exporters is pushing farmers in the fertile delta region to the brink, with mounting costs to the environment.

The communist country is already the world's second largest exporter of the staple grain. But intensive rice cultivation, particularly the shift to producing three crops per year, is taking its toll on farmers and the ecosystem.

"Politicians want to be the world's number one or two rice exporter. As a scientist, I want to see more being done to protect farmers and the environment," said Vietnamese rice expert Vo Tong Xuan.

A major famine in 1945 and food shortages in the post-war years led to the government adopting a "rice first" policy.

This now generates far more of the crop than needed to feed Vietnam's 90 million population and has catalysed a thriving export industry.

Rice yields have nearly quadrupled since the 1970s, official figures show, thanks to high-yield strains and the construction of a network of dykes that today allow farmers to grow up to three crops per year.

The amount of land under cultivation in the Mekong Delta has also expanded and quotas are in place to prevent farmers from switching to other crops.

But experts are questioning who really benefits.

According to Xuan, farmers don't reap the rewards of the three crop system -- the rice is low quality and they spend more on pesticides and fertilisers, which become less effective year by year.

He argues the delta would be better off if farmers cultivated a more diverse range of crops, from coconuts to prawns, with just the most suitable land used to grow rice.

The country should consider abandoning the third crop and focus on improving quality and branding to sell Vietnamese rice at higher prices, he said.

Currently, the bulk of Vietnam's rice is exported at cut-price costs on government-to-government contracts through large state-owned enterprises (SOEs) like the Southern Food Corporation, known as Vinafood 2.

"Over the last five years, the trend is towards lower-quality rice," admitted Le Huu Trang, deputy office manager at the firm.

Some argue that such SOEs have a vested interest in maintaining the status quo as they earn lucrative kickbacks from the huge contracts.

But even as salt water intrusion, drought and flooding increase in the delta -- to say nothing of agricultural chemical pollution -- it is also hard to convince farmers to change.

"The prevailing mindset is to grow three crops... we have to explain two crops is better," said Nguyen Tuan Hiep from the Co Do Agriculture company.

Over the last 20 years, Co Do -- which is state-run but a flagship model of how the industry could evolve -- has identified the best rice-growing land in the delta and helped farmers expand their farms.

They now work with 2,500 families on 5,900 hectares (14,600 acres) of land, enough for each family to make a living -- typically the average rice farm in the delta spans less than one hectare.

The firm invests heavily in high-quality seeds and improving irrigation, while also advising farmers on the best chemicals to use.

"Two crops is more sustainable long term -- the soil is not degraded, the environment isn't polluted, and value of the rice increases," Hiep said.

Climate change is another factor threatening the delta, according to the World Bank Group's vice president and special envoy for climate change Rachel Kyte.

"This is really ground zero for some of the most difficult adaptation, planning challenges that any country in the world has," she said.

Ultimately Vietnam has tough choices to make, including whether to help people transition from a rice-based economy to aquaculture (fish or shellfish farming) or other crops, Kyte added.

Scientists there are busy trying to breed new strains of rice that require fewer fertilisers and can survive in extreme weather.

"If farmers don't change, if we can't find a suitable new rice strain, pollution will continue and incomes will drop," Thac said, adding these measures were essential to save the delta.