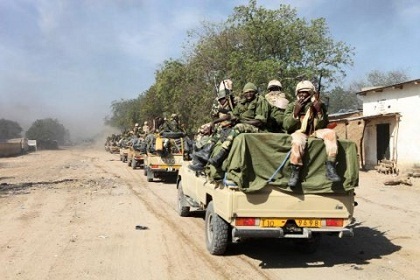 Nine Chadian soldiers were killed and 16 wounded after being ambushed by Boko Haram fighters in northeastern Nigeria, the Chadian army said Thursday.

A military spokesman said fighting took place on Wednesday about 10 kilometers (six miles) from the town of Malam Fatori, which Niger said was retaken by regional forces fighting the Islamist radicals earlier this week.

"Elements of the Chad-Niger (military alliance) were killed in a pocket of resistance," Colonel Azem Bermandoa Agouna told AFP.

"After heavy fighting, the armed forces of Chad and Niger totally cleaned up the zone," the spokesman added.

The allied troops killed "more than 100" members of Boko Haram, a ruthless fundamentalist sect that has killed at least 13,000 people since it launched an insurgency in northeast Nigeria in 2009, according to a military statement said.

Large quantities of equipment were also seized by the soldiers.

When the joint force took Malam Fatori on Tuesday, they were unopposed because Boko Haram fighters had gone, but some of the Islamists remained in the vicinity, Agouna said.

A violent skirmish took place on Wednesday between Malam Fatori and the border town of Bosso in Niger, a high-ranking officer in Niger's army reported at the time, giving no further details.

Niger's army was due to release casualty figures, he added.

That battle left "many wounded on the Chadian and Nigerien sides", according to a humanitarian relief official, who added that "deaths and arrests" were likely among Boko Haram's ranks.

The capture of Malam Fatori was crucial for the regional coalition, which also includes Cameroon and Benin, and has finally moved into Nigeria as outgoing President Goodluck Jonathan came under mounting criticism for the failure of a powerful army to defeat the Islamists.

Malam Fatori, close to Nigeria's northeast border, had become known as Boko Haram's main refuge in the region whenever its fighters fell back after defeats.

Chadian and Nigerien troops made the town a primary target once they entered Nigeria on March 8, marking the start of foreign military operations on the home territory of the Islamist sect.

After the swift capture of the Nigerian town of Damasak, coalition troops have pressed on eastwards close to the border with Niger, successively taking Gachagar, Talagam, Abadam, then Malam Fatori.

Chadian troops, active around the Lake Chad region where the Nigerian border converges with those of Chad, Cameroon and Niger, are also operating on a second front, based on Cameroonian territory.