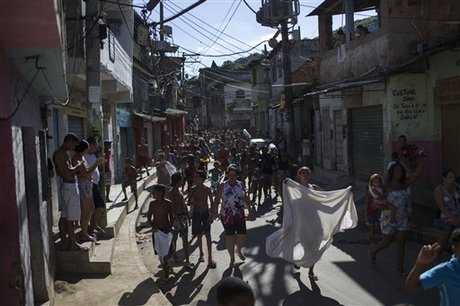 Brazilian police fired tear gas Friday to break up a protest in a Rio de Janeiro slum that erupted after a 10-year-old boy was killed in what officers called a shootout with drug traffickers.

Some 300 residents of the Complexo do Alemao, a sprawling group of shantytowns notorious for violence, blocked an access road to the area after the boy, Eduardo Jesus Ferreira, was killed by a gunshot -- the fourth person killed there in just over 24 hours.

"The police do nothing but kill our neighbors!" shouted some protesters, while others chanted slogans against the Police Pacification Unit (UPP) that has occupied the favela, or slum, since it was sent in to wrest control from drug gangs in 2010.

The protesters responded by throwing stones. One police officer was injured.

"We were forced to use non-lethal weapons to contain the protesters," police told AFP, without specifying what led to the decision.

Police say Ferreira was shot Thursday night when they came under fire from a group of "criminals" in Areal, one of the slums that make up the complex of 70,000 people.

But his parents, Terezinha Maria de Jesus and Eduardo Ferreira, rejected that account.

"There was no shootout. The only shot heard was the one that killed my son. I ran out of the house and recognized an officer from the SWAT team near Eduardo, who was lying on the ground. When I got close, he told me he would kill me too," the boy's mother told newspaper Globo.

She said her son was not involved in the drug trade.

The officers involved have been taken off the street pending an investigation, which will include ballistics tests.

President Dilma Rousseff expressed her "solidarity" with the boy's parents and said: "The circumstances of this death must be clarified and those responsible tried and punished."

On Wednesday, a woman in the same area was killed by a stray bullet from a shootout between police and drug traffickers.

Her daughter was also wounded.

Two other residents were killed in unexplained circumstances.

Shootouts have been on the rise in the past three months in the complex, once touted as an example of the "pacification" program's success.

In all, 38 police units have been sent into 174 impoverished, crime-wracked neighborhoods around Rio, which will host the Olympics next year.