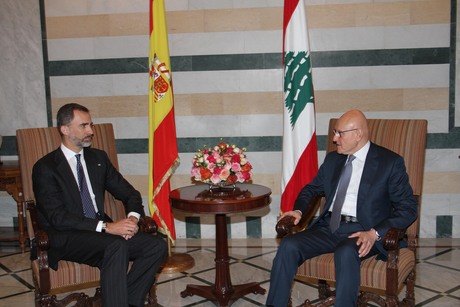 In their meeting at the Grand Serail, Salam underlined his keenness on strengthening all aspects of the relation with Spain, extending gratitude over Spain's participation in the United Nations Interim Force in Lebanon (UNIFIL), state-run National News Agency reported.

He also lauded “the efforts of the Spanish battalion and its success in establishing the best ties with southern Lebanese citizens in its area of operations.”

And in the name of the Lebanese people, Salam offered condolences over the death of the Spanish soldier who was killed by Israeli shelling in January.

Felipe VI for his part called for "peace and harmony" in Lebanon.

The king's first visit to Lebanon since he took the throne last June follows a joint Spanish-Israeli probe into the death in January of Corporal Javier Soria Toledo, 36.

At the start of his visit Felipe paid tribute to Soria and the 12 other Spanish serviceman killed over the years in Lebanon on peacekeeping duty.

"Spain's commitment to this (peacekeeping) aim is firm and decided," Felipe said.

"We will therefore continue to support the Lebanese armed forces through our participation in the United Nations Interim Force in Lebanon (UNIFIL)."

Lebanon "has suffered a lot in its recent history and Spain wishes it a future of peace and harmony," Felipe said.

The king arrived in Beirut in the afternoon for an official two-day visit.

The monarch, who is accompanied by an official delegation, is scheduled to meet Lebanon's top officials and inspect his country's UNIFIL battalion in the South.

He was welcomed at the airport by Deputy Prime Minister Samir Moqbel, who represented PM Salam, the Spanish embassy's charge d'affaires and a number of embassy employees.

Salam threw a dinner banquet in honor of the monarch and the accompanying delegation after the meeting.

The king will head Wednesday morning to the South aboard a military helicopter to inspect his country's U.N. peacekeeping contingent, NNA said.

Felipe VI arrived in Lebanon only hours after Israeli security sources acknowledged that the death of a Spanish U.N. peacekeeper in January was caused by Israeli fire.