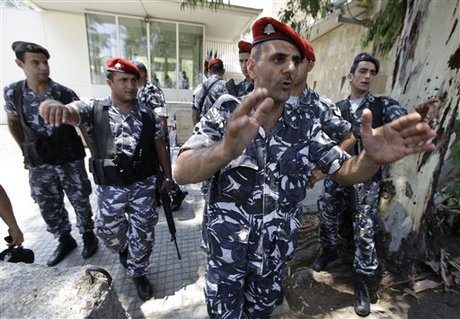 The bodies of two middle-aged men who had been shot in the head were discovered in two regions near Beirut early Friday, the National News Agency reported.

NNA said the body of Albert Ramez al-Nashar, 52, was found under a bridge in the town of Antelias. It was taken to Haroun hospital in Zalka.

Voice of Lebanon radio station (93.3) quoted a security source as saying that a speeding car dropped the body at around 3:00 am.

The second victim was identified as 48-year-old Shaker Saeed Abdul Nour. His body was found near a marble factory in the Jisr al-Wati area of the town of Sin el-Fil.

Preliminary investigation showed that the man was killed after his taxi was stolen. A shell casing lied next to his body which was taken to the Lebanese Canadian hospital in Sin el-Fil, NNA said.

It was not yet clear whether there was a connection between the two murders.

habal amel another successful operation from your tribe i see....

In the ole days they used to kill people and drop em off horseback. Today, they use speeding cars. Same ole wild wild west/east...Heehaaaaaa.

In the ole days they used to kill people and drop em off horseback. Today, they use speeding cars. Same ole wild wild west/east...Heehaaaaaa.

Marie i have to admit that you keep raising the bar....i never believed that i can meet someone as ignorant as you....are you sure this was done by the tribe of Jabal Amel? Do you know who he belongs to? Did some witch share with you details that we don't know? I am sure that the guys in ISF can use your expertise in criminology...or u know what...spare the world your intelligence and consider karaoke...singing can make you good money and it can all start between the walls of your bathroom.