Riachi Says LF Determined to Carry Out Reconciliation with FPM 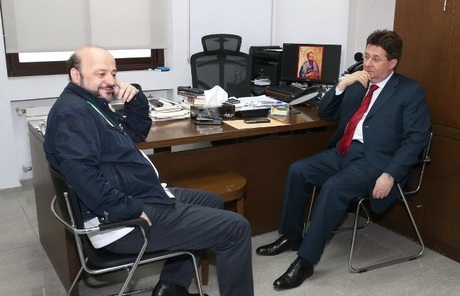 Lebanese Forces media officer Melhem Riachi stressed on Saturday that the party insists on carrying out reconciliation with the Free Patriotic Movement and announce the “declaration of intent.”

He pointed out that prominent officials at the LF don't oppose the reconciliation with the FPM, noting that he is only a mediator tasked by the party chief, Samir Geagea, to follow up the matter.

Riachi said in remarks to OTV channel that “polls indicate that there is almost a unanimity over dialogue” on dialogue between the two rival Christian parties, expressing hope that positive results would surface soon.

On Thursday, Change and Reform bloc MP Ibrahim Kanaan held talks with Geagea at his residence in Maarab in presence of Riachi.

Kanaan said after the meeting: “The declaration is almost complete.”

Media reports said that the declaration of the document will be crowned with a meeting between Aoun and Geagea with the timing and venue of the talks to be decided later on.

Both Geagea and Aoun have announced their candidacies for the presidency. Their rivalry, in addition to other issues, have left Baabda Palace vacant since President Michel Suleiman's six-year tenure ended in May last year.

The dialogue between the two parties recently kicked off in an attempt to defuse tension and safeguard the country.

Riachi told OTV that “the reconciliation between the FPM and LF is progressing at an average pace.”

“We consider that Iran doesn't want the election of a new head of state in Lebanon at the meantime,” he concluded.

(1). If we Christians are still waiting for the LF and the FPM to reconcile, wlak ya3tikoun mallioun 3afyeh. Wlak, I am LF and my blood if LF+, but truth is that both LF and FPM messed up things during the war, OK, the FPM is the main culprit traitor, but our unity nowadays is not about a political program as to whom gets more voices, but rather our voices are right now drowned in the fight between Hezbollah and Mustaqbal on the one hand and the growing conflict between Shiites and Sunnis. Let us each keep his alliances respectively with our Muslim siblings, I have nothing against it but rather in support of it, but also and at the same time, we Christians need to be truly forceful with both LF and FPM to finish once and for all with this old feud that seems to follows us everywhere we go.

(2). Truth is that the economy is literally dead, immigration of our youths, all sects confounded is ongoing, the damn Syrians are taking our jobs and businesses and they care less anyway. We now have a new Summer Season coming up, so what, are we going to sit down like fools and just accept to have our lives dictated by the feuds of HA and Mustaqbal?! Let them fight forever, wou zak kama seur, but we can unite our ranks, make our weight known for a new president, make H.E the Patriarch make it public that we Christians have no divisions between us, then let's see what Hakim and the general do.

Ado, I have to disagree with you on this one, we Christians are not as weak as your post seems to imply. The presidency even if with reduced powers still has a significant role to play, the first one being God forbid if a Muslim was to take that seat, the different Muslim factions would be at each other's throats in no time. Then the Christians migration is not as big as the Muslim one which is 5 to 1, then don't forget, a high proportion is returning back home after the disillusionment of life in the West. Christians still play a big role in Lebanon, but alas it took a real traitor like Michel Aoun to divide us, so yes, our strength obviously lays in our unity which Aoun the bloody claoun is making sure won't happen. Nowadays that he is losing his political clout, it will be only a matter of time before we Christians regain our rightful role in Lebanon.

humble... turn the other check and he without sin... caste the first stone! all those christian virtues are important if and when you decide to reconcile with Aoun. It is only the right and responsibility of "Syrians" to decide who they want to represent them! As for the Baath Party and their reparations to Lebanon, i agree there needs to be an accounting. But most, if not all current Lebanese leaders have just as much blood on their hands and reparations owed!

don't be a hypocrite with your demands for nepotism, feudalism and pro syrian occupation... your demands to reconcile with the fpm need to be met by every other party that is "pro" "m14"!

Our No 1 disease are politicians sold to the outside.

Such as Neemat Frem, Ziad Baroud, or others not necessarily from M14.

Don't we love it when the castrated yellows thumb our posts down? It means one thing and one thing only, that we are doing things well.