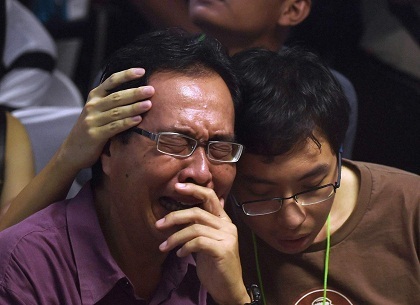 Ten farm workers were killed and two injured after a truck plummeted off a hillside in southern Myanmar, state media said Wednesday, as road accidents surge during the Buddhist New Year holidays.

The truck bound for a small village in the Irrawaddy delta region with 18 people aboard hurtled off the road at around 3 am Tuesday when the driver lost control, according to the state-run Myanmar language Mirror newspaper.

"Ten people including the bus conductor Hla Thein Oo were killed," said the Mirror, adding that two men sustained injuries while another five people on board escaped unscathed.

It was unclear what happened to the driver.

The accident comes as tens of thousands in Myanmar mark the Thingyan water festival, a Buddhist celebration to welcome the new year that has become increasingly vibrant since the end of outright military rule four years ago.

The Mirror said at least 26 people have been injured in car accidents in the country's main commercial city of Yangon since festivities began on Monday.

In neighboring Thailand the more raucous Songkran water festival brings carnage to the roads each year, despite regular safety campaigns, owing to a dangerous mix of alcohol, busy roads, water-throwing and reckless driving.

More than 300 people have died and nearly 3,100 have been injured on Thai roads since Thursday, when people started traveling home for the holidays, according to an update by the kingdom's Department of Disaster Prevention and Mitigation on Wednesday.

Even out of festival season road traffic accidents are common in both Myanmar and Thailand.

A recent report by the World Health Organization said Thailand saw 38.1 road deaths per 100,000 people in 2010 -- behind only the Dominican Republic and the South Pacific island of Niue.

And in Myanmar the transport network is in poor condition owing to decades of underinvestment by the junta which ruled the country for almost half a century until early 2011.

Under the quasi-civilian government now in power the country has seen new vehicles flood into the nation and observers say Myanmar is seeing more road accidents than ever before.

Thingyan officially runs up to and including Thursday, while in Thailand Songkran festivities wind down Wednesday.