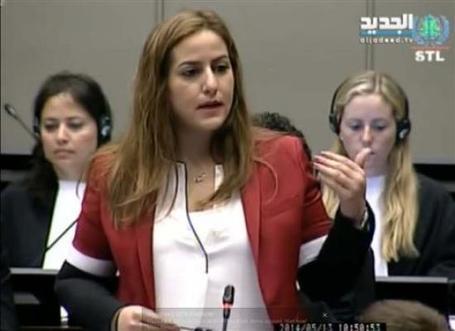 The contempt case against al-Jadeed TV network and journalist Karma al-Khayat, accused of obstructing justice, kicked off on Thursday at the Special Tribunal for Lebanon in The Hague.

Al-Khayat and al-Jadeed S.A.L. are charged with two counts of contempt and obstruction of justice under rule 60 of the Tribunal’s Rules of Procedure and Evidence.

The case against them comes over broadcasts aired on the TV network in 2012, which revealed information about alleged confidential witnesses at the court.

Kenneth Scott, who is prosecuting al-Jadeed and al-Khayat, told the STL that this case is linked to a conduct that puts certain people, their families and their interests at risk.

Scott stressed in his opening statement before Contempt Judge Nicola Lettieri that he believes in freedom of expression, but the information which puts people in danger should be taken seriously.

“The witnesses are now exposed" because of al-Jadeed's broadcasts, he said.

The witnesses' faces were hidden and names were not mentioned, but "nobody was fooled," Scott told the judge.

He said witnesses' voices were not masked and information such as initials, occupations, the businesses where they worked and even their vehicles' license plates were mentioned or appeared in camera shots.

But defense counsel for al-Khayat and al-Jadeed, Karim Khan, praised the TV network in the Defense's opening statement.

Al-Khayat later made her statement to Lettieri, saying: “It is our duty as journalists to find the truth that destroyed our country.”

“The court was established for us and from our money,” she said.

“We are facing accusations because we dared to expose the mistakes of the prosecution,” the journalist added.

She accused the court of not bringing into trial or holding accountable other personalities who had taken bribes or had leaked confidential STL documents.

“We believe in the verdict of the public opinion ... including our viewers” she said.

Journalist Ibrahim al-Amin and al-Akhbar daily are facing similar charges for publishing an article over the alleged witnesses in 2013.

The STL is trying five Hizbullah members who have been charged with plotting ex-PM Rafik Hariri's Feb. 14, 2005 assassination in a massive explosion at the Beirut seafront.

They have not been arrested. Their trial in absentia began in January 2014.

Hizbullah denies involvement in the murder and the group's leader, Sayyed Hassan Nasrallah, has denounced the court as a conspiracy by his archenemies — the U.S. and Israel.

this has nothing to do with freedom of the press, rather such information is protected by the courts in all countries.

It is Rule 60 bis related to the extent of the abilty of thevfreedom of Press.
The STL is no joke, and they will learn sooner or later to respect it.

The problem isn't from the medias who published it, but from the STL who leaked it. If any intelligence agency was after their false witnesses and gossip stars they would have obtained the information without needing al jadeed.

Let the STL take responsibility for their own incompetence and failures before they try to muzzle our journalists.

And just wondering, what would happen if the STL leaked some evidence? Oh wait, I forgot, they never found any.

is that your best attempt at humor, mowaten?

You think you are a trial judge, I bet mowaten.

You think you are relevant, I bet eagleyawn.

Ebola is a disease which is spreading hatred among the people of the same country. It is destroying the possibility of living together.

Hi humble! Can you please post these two by two instead of only once per article? I'm afraid we're still far from your objective of posting this amazingly witty and smart line 124587 times per day.

Wouldn't you prefer to behead her? This would be more in line with our modern democracies of gulf.

marry her off to an ISIS fighter

there goes another silly sexist post. Proves a mentality, that's all ya Elias.

Feeling lonely in yours lebjack?

why dont they try and find the location of the accused and interview them, rather than

Marcus, these people feel that they can call anyone they hate by any names they wish. It looks like its payback time now.

where were all the bleeding hearts worried about freedom of the press when hassan nasrallah's son attacked this same aljadeed?