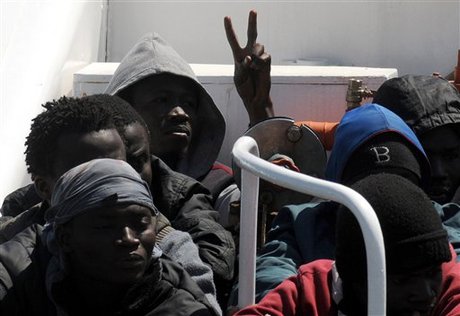 Italian police said Thursday they had arrested 15 African migrants after witnesses said they had thrown 12 passengers overboard following a brawl between Muslims and Christians on a boat heading to Italy.

The victims were "of Christian faith, compared to their attackers who were of Muslim faith," police in the Sicilian city of Palermo said in a statement, saying the 15 people were arrested on suspicion of "multiple aggravated murder motivated by religious hate".

The incident aboard the rubber dinghy, which was carrying about 100 migrants, took place in the Strait of Sicily, between Tunisia and Italy.

According to a group of Nigerian and Ghanaian survivors, a fight broke out over religion, with a group of Muslim passengers threatening the Nigerians and Ghanaians after the latter -- who were in the minority -- declared themselves to be Christians.

"The threats then materialized and 12 people, all Nigerian and Ghanaian, are believed to have drowned in the Mediterranean," the statement added.

The 15 migrants arrested over the attack on their arrival in Palermo were from Ivory Coast, Mali and Senegal.

In a separate migrant tragedy, as many as 41 migrants were feared drowned after refugee boat sank in the Mediterranean, Italian media reported.

islam should be banned

Wow, they did not want Italy to grow, with another 12 Christians added to a long list of Christians already there!
R.I.P Brothers!

keep those apes out of europe, send them back home to put in qaddafis toaster.

Opium of the masses

"Opium of the masses" is a pathetic way to avoid comparing religions.
A way to avoid saying the truth about islam, the "religion of peace". LOL !

if these "people" want refuge, send the boats to saudi arabia or turkey where like minded "brothers" rule and control their respective societies. these "people" do not conform to italian or european or any civilized world's values, they are total barbarians and in most cases, its evident by taking a glance at them. also sectarian murderers. anti westerners. pro bin ladens, baghdadi lovers. they don't belong in the west and they need to stop accepting libyan and syrian refugees, these two peoples can't adapt successfully to western society.