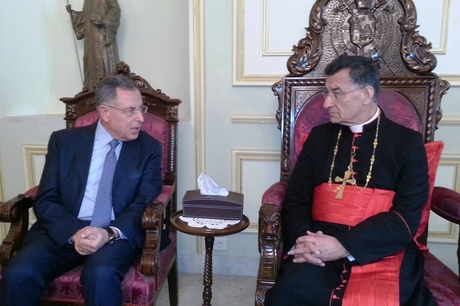 Al-Mustaqbal Movement bloc leader MP Fouad Saniora expressed concern on Monday that the prolonged presidential vacuum will drag Lebanon into the conflict in the region.

Saniora said after talks with Maronite Patriarch Beshara al-Rahi in Bkirki that the presidential vacuum is affecting the country on several levels.

“Talks focused on several issues, at the forefront the presidential elections,” he told reporters.

He called for the immediate election of a new head of state, warning that vacuum could “drag the country into the conflict in the region.”

“The presidential elections is a matter that concerns all the Lebanese and Arab countries,” Saniora noted, urging the election of a “strong president.”

He also voiced concern over the rift between the political arch-foes, warning that it would increase tension in Lebanon.

“We are passing through difficult circumstances... only the legitimate authorities could safeguard the state and not the political settlement.”

MPs failed on several occasions to elect a new head of state over lack of quorum. President Michel Suleiman's term ended in May without the election of a successor.

Hizbullah and Free Patriotic Movement leader MP Michel Aoun's Change and Reform bloc have been boycotting electoral sessions due to a disagreement with the March 14 camp over a compromise presidential candidate.

hizbushaitan and his fpm can dream as much as they want, but aoun will never be president.

The Caporal is a loser.

Dear Batrak,
We beg you to name the one who is destroying the Christians.

How many multimillions has the Caporal received in 10 years????
and all the dirty and corrupt people around him ???