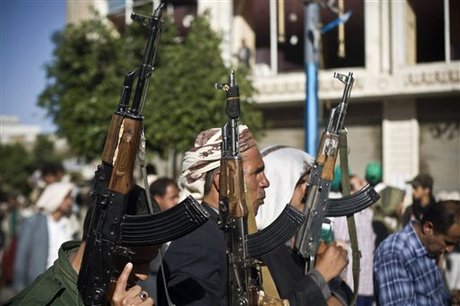 A newly announced division of the Islamic State group calling itself the "Green Brigade" on Thursday claimed a bombing in Yemen that it said had killed five Shiite rebels.

In a message on Twitter, the group said it had struck a vehicle of the Huthi rebels in Yarim in the central province of Ibb on Wednesday.

Al-Qaida has traditionally been the dominant jihadist group in Yemen, where a Saudi-led military coalition has carried out a month of air strikes against the Huthis and their allies.

IS claimed its first attack in Yemen on March 20 -- multiple suicide bombings targeting Huthis at Shiite mosques in Sanaa that killed 142 people and wounded more than 350.

Al-Qaida and IS, both Sunni extremist groups, consider Shiites to be heretics.

The Yarim attack is the first claimed by IS militants in Ibb province, where residents on Thursday also reported fresh bombing by the Saudi-led coalition.

The Saudis are cooperating with ISIS an al Qaeda, as always.